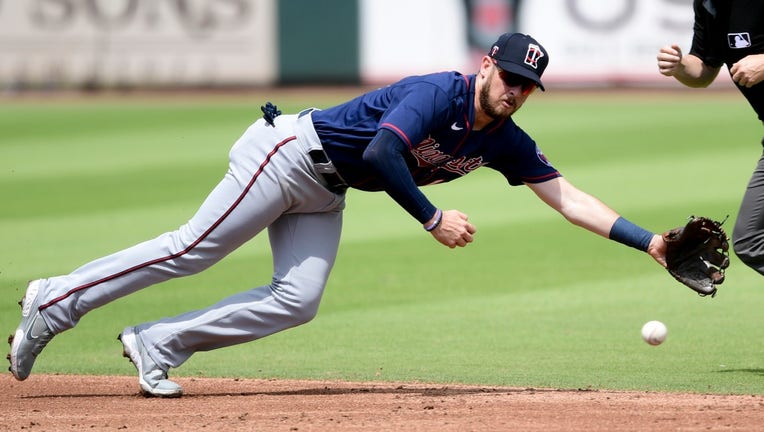 JT Riddle #15 of the Minnesota Twins attempts to field a ground ball during the third inning against the Pittsburgh Pirates during a spring training game at LECOM Park on March 23, 2021 in Bradenton, Florida. ((Photo by Douglas P. DeFelice/Getty Images))

MINNEAPOLIS - The Minnesota Twins face the Oakland Athletics in a series finale Wednesday afternoon, and they’ll be without utility player JT Riddle.

The Twins placed Riddle on the COVID-19 IL on Wednesday, joining Max Kepler, Kyle Garlick and Caleb Thielbar. Last week, the Twins put Andrelton Simmons on the COVID-19 IL. The Twins had three straight games postponed while the team did additional COVID-19 testing and contact tracing.

Twins officials say Riddle did not test positive for COVID-19, but was placed on the list for close contact.

The team was cleared to fly from Anaheim to Oakland Monday night, and faced the Athletics in a doubleheader Tuesday afternoon. The Twins lost both games, 7-0 and 1-0. They had a chance to take the lead in the seventh inning of Game 2, but with two runners on and two out, Willians Astudillo flew out to the warning track in left field to end the game, just feet away from a go-ahead three-run homer.

Riddle did not play in Game 1 Tuesday, and was on the bench for Game 2 until he pinch ran for Nelson Cruz, who was hit by a pitch to start the seventh inning. To take his place on the roster, the Twins selected the contract of catcher Tomas Telis from the Taxi Squad.

Kenta Maeda takes the mound for Wednesday’s series finale. After getting swept in the doubleheader Tuesday, the Twins have lost three straight and are last in the American League Central Division at 6-10.