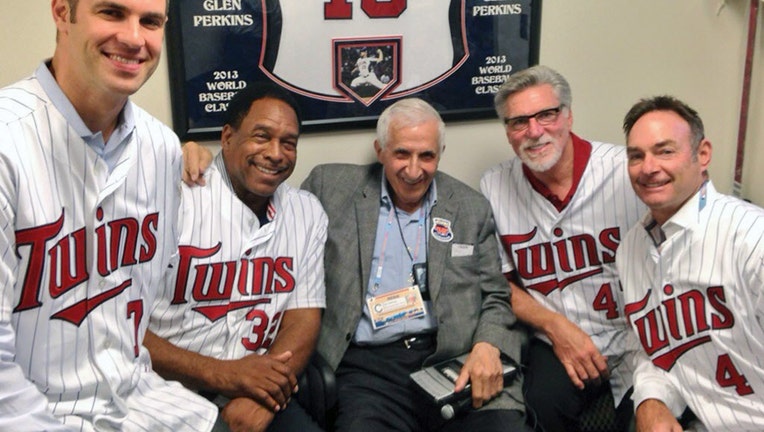 MINNEAPOLIS - Minnesota lost a sports jounalism legend on Sunday, when long-time reporter and columnist Sid Hartman died at the age of 100.

Hartman turned 100 back on March 15, and spent more than seven decades covering Minnesota sports. He founded the Minneapolis Lakers before they moved to Los Angeles, and had close relationships with every pro sport in the Twin Cities.

Hartman was known to have many "close personal friends." After the news of his death broke Sunday, Minnesota teams and athletes took to social media to honor Sid.

"Our hearts are broken with the news of Sid Hartman’s passing. It is nearly impossible to put into words what Sid meant to the sports world and to Minnesota. He was an iconic sports figure, a tenacious reporter and a tireless advocate for his beloved state. His doggedness and work ethic were unmatched, but it was Sid’s ability to nurture relationships that truly set him apart. He was a confidant and a loyal friend to countless athletes and coaches across the country," Vikings owners Mark and Zygi Wilf said in a statement. "The impact Sid had on collegiate and professional sports can never be replicated and will never be forgotten. His presence and his personality were constants during the Vikings first 60 seasons. Sid welcomed our family to town in 2005, and we will always appreciate his support for us as owners and for the Vikings franchise. Our prayers are with the entire Hartman family."

“I am truly saddened by the news of the passing of one of the Twin Cities great personalities in Sid Hartman. With over 21,000 bylines in the Star Tribune, Sid will be considered one of the premier journalists of our time. Sid will always be a staple amongst Minnesota sports and even more so in the basketball community, helping shape what many consider the NBA’s first dynasty with the Minneapolis Lakers. I will always remember Sid for his will, determination, and the upbeat spirit with which he lived his life. Above all, I am thankful for his friendship over all these years. On behalf of the Timberwolves and Lynx, we want to extend our deepest condolences to the entire Hartman family.”

“It’s hard to put into words what Sid meant to my family and me. He was resilient, positive, and worked effortlessly to develop meaningful relationships that gave millions of readers a glimpse into the world he loved.

"Having known my parents since they were teens, Sid really was a “close personal friend” and was always a voice of reason, stability and familiarity. I will remember Sid fondly as he embraced my family in a way that only Sid Hartman could. As long as I can remember, he’s always been someone I trusted not just as a friend but as a journalist who did everything with integrity.

Sid was a remarkable example of living life to the fullest and finding your passion – may we all learn from the legacy he leaves.”

The Minnnesota Twins on Sunday released a statement on Hartman's death. Sid has media rooms at Target Field and U.S. Bank Stadium named in his honor, and has his own statue outside Target Field.

“The Minnesota Twins today mourn the passing of Sid Hartman, while also celebrating his extraordinary life, his immeasurable contributions to our state’s sports scene, and his enduring impact on generations of Minnesotans. Sid was truly a one-of-a-kind personality, and his constant presence at the ballpark – which spanned the press boxes and clubhouses of Metropolitan Stadium, the Metrodome and Target Field – will be missed by so many."

Minnesota athletes, past and present, also took time to pay tribute to Sid on Sunday.

"My thoughts and prayers to Sid Hartman and his family. Obviously a Minnesota icon and heard about his passing. I just did a story for him the other day and he was obviously a big part of this organization, and was always around the facility," Thielen said.