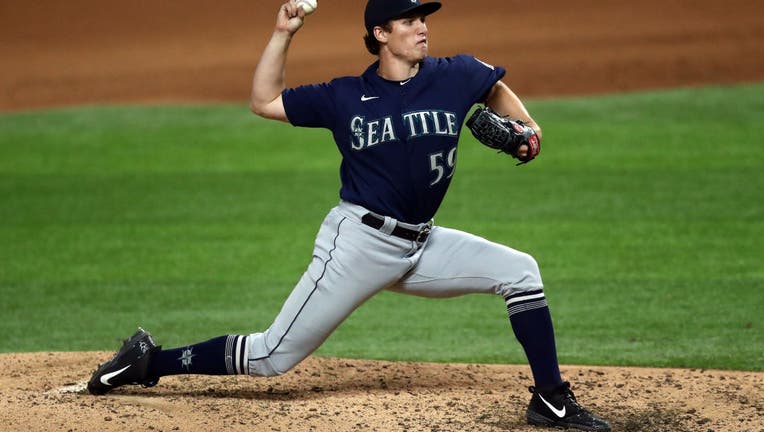 SEATTLE (FOX 9) - Like many amateur baseball players across the state, Joey Gerber honed his pitching skills on a town ball team, playing for the Hamel Hawks in Hamel, Minnesota.

“It all started kind of around then realizing that I know I’ve got this potential that I haven’t fully realized,” Gerber told FOX 9.

Like many amateur baseball players across the state, Joey Gerber honed his pitching skills on a town ball team, playing for the Hamel Hawks in Hamel, Minnesota.

Fast forward to 2020, and Gerber is starting to see that realization come to life - going from town ball to the big time after making his MLB debut with the Seattle Mariners last week.

“It’s been unexpected, that’s for sure,” Gerber said. “I was not anticipating really making the team.”

Getting called up has been surreal for the Wayzata native, who continued his career as a preferred walk-on at the University of Illinois.

The last few days he's been living a life-long dream in Major League Baseball while riding the reality of the ebbs and flows that come at the highest level of the game.

Gerber pitched a perfect inning in his debut against the Angels, but then gave up three earned runs in 1.1 innings of work in his third career outing against the Rockies.

Many factors continue to motivate Gerber to keep a spot in the majors.

“You just see how everyone is, and it’s like I know I am good enough to stay here as long as I stick to what got me here,” Gerber said.

Joey strives for success for himself and his MLB team, but also for young baseball players in his home state hoping to follow in similar footsteps.

Gerber is showing others that the journey is not about where you start if you’re willing to put in the work.

“If you’re a kid from Minnesota, there’s a good chance you have a lot of room for improvement and you’ve got a lot of potential that is untapped,” Gerber said. “If you’re aware of what you need to do to improve, it’s definitely possible to make it.”