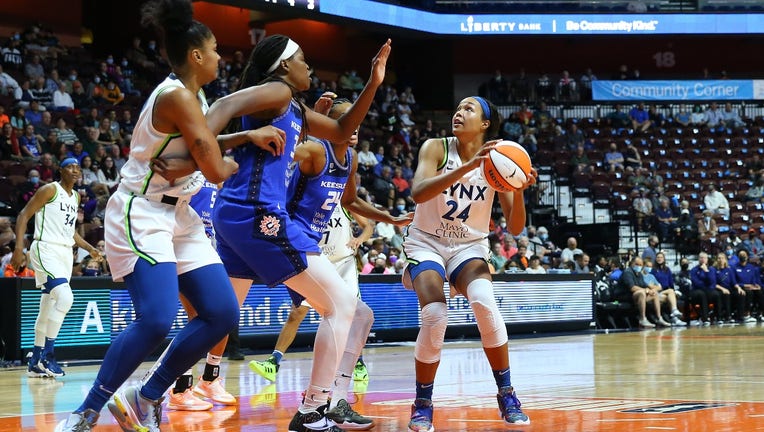 MINNEAPOLIS - The Minnesota Lynx and WNBA announced on Wednesday in the league’s continued efforts to make the game global, they’re taking one preseason season came north of the border.

The Lynx will face the Chicago Sky on May 13 at Scotiabank Arena in Toronto. It’ll be the first WNBA game ever played in Canada.

"Bringing a WNBA preseason game to Canada is an important milestone for the global growth of the league," said WNBA Commissioner Cathy Engelbert in a statement. "I’ve spoken often of the global popularity of women’s basketball and, this past season, WNBA games were broadcast in 207 countries and territories, including in Canada, where fans have shown a great appetite for WNBA action. And as Canadian stars like Bridget Carleton, Natalie Achonwa and Kia Nurse continue to flourish in and drive interest around the league, we’re looking forward building on the momentum and excitement surrounding the WNBA in Canada with this historic game."

The Sky are coming off winning a WNBA title in 2021 and reaching the semifinals this past season, and have four WNBA All-Stars.

The Lynx have won four WNBA titles since 2011, and have been to the playoffs 11 straight seasons. They’ll be led by Napheesa Collier, who missed most of last season after having her first child. The Lynx are also starting a new era, with star center Sylvia Fowles retired. The Lynx also feature Aerial Powers, and Canadian players Natalie Achonwa and Bridget Carleton.

"We are looking forward to participating in this historic game for the WNBA," said Lynx Head Coach and President of Basketball Operations Cheryl Reeve in a statement. "The league’s global popularity has shown incredible growth, and I am pleased our team will be a part of continuing to pave the path for the WNBA by bringing our game to Canada."

The May 13 game will mark the third time the WNBA has played a game outside the United States.