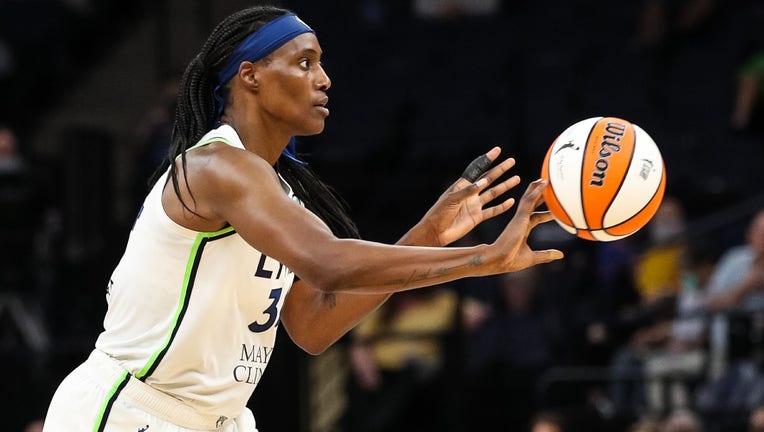 Sylvia Fowles #34 of the Minnesota Lynx passes the ball against the Los Angeles Sparks in the second half of the game at Target Center on September 2, 2021 in Minneapolis, Minnesota. The Lynx defeated the Sparks 66-57. ((Photo by David Berding/Getty Images))

MINNEAPOLIS - The Minnesota Lynx are on day three of training camp and held Media Day on Wednesday at Target Center.

The message from Cheryl Reeve to her team is simple and direct with the season opener a little more than two weeks away: The Lynx will do whatever they can to send Sylvia Fowles out a WNBA champion. Reeve and the Lynx have made the WNBA Playoffs 10 straight years, and won four titles. Two of them have come with Fowles at center.

Minnesota Lynx on a mission for 2022

The Lynx wrapped up their media day today in Minneapolis as they prepare for the 2022 season.

With All-Star guard Kayla McBride back, and signing All-Star Angel McCoughtry in free agency, Reeve has added pieces to try to get them back there.

"This is probably the first time since 2017, it feels like this is the first season that everyone that’s involved has an understanding of that. This group feels like they have more of a tangible idea of what it takes," Reeve said Wednesday. "We feel like a team that’s got a shot to contend, and we want to make sure we maximize that in this group. It’s palpable."

Fowles, 36, is entering her 15th WNBA season and eighth with the Lynx after coming to Minnesota in 2015 via trade. She was a WNBA Finals MVP for both titles with the Lynx, and was the Lynx MVP in 2017.

Fowles and Reeve held a private exit meeting at the end of last season, after being eliminated by the Chicago Sky in the WNBA Playoffs. Reeve told her she didn’t look like she was done playing. Fowles agreed, but needed time to think it over. Fowles let her know in January she was coming back for one more season, and soon after made it public on social media.

"When you have a player like Syl, we say she’s 36 but look at her. Syl has more to give, I just wanted her to be happy and at peace," Reeve said. "We told her ‘We will do our very best, if you do decide to play, to give you the best team possible to send her out the way we want to send her out.’ Syl deserves everything coming her way this final season. That’s what we want Syl to do, enjoy the heck out of it. I hope we all go crazy at every turn, because she deserves every bit of that."

Fowles’ last regular season opener is May 6 as the Lynx are at the Seattle Storm. Her last home opener is two days later, against the Washington Mystics. Her home regular season finale? Aug. 12 against Seattle. The hope is the Lynx will have home playoff games, but Fowles isn’t sure how it will feel.

She said back in February she doesn’t want a farewell tour, but she’s going to get one.

"Honestly I don’t know. I guess it hasn’t really sunk in that this is going to be my last year. Last game, I can’t tell you what that’s going to be like. I guess we’re all going to have to wait to see," Fowles said.

If the Lynx are going to make a title run this year, it’ll be without Napheesa Collier. She’ll miss the 2022 season as she’s about a month away from having her first child. That’s partly why Reeve went to free agency to bring in McCoughtry, a 12-year veteran, six-time All-WNBA pick and five-time All-Star.

"She’s done everything she could possibly do to put the right pieces in place. I’m just excited to see what we can work with," Fowles said of Reeve. "Of course, championship is always in our mindset but at the same time, you want to do the little things to put you in the right position."

In seven seasons with the Lynx, Fowles is averaging 15.9 points, 9.8 rebounds and 1.6 blocks per game in 192 starts. She’ll go down as one of the best players to ever wear a Lynx jersey.

"I think we’re all working a little harder and grinding a little more. She means so much to this team and we want to bring her a championship," forward Aerial Powers said.

One thing the Lynx will need is to get off to a fast start. Last year, training camp didn’t go as Reeve had anticipated, and Minnesota lost its first four games. They recovered, winning 13 of their next 16, and made the WNBA Playoffs for the 10th straight year.

That, and sending Fowles out a WNBA champion.