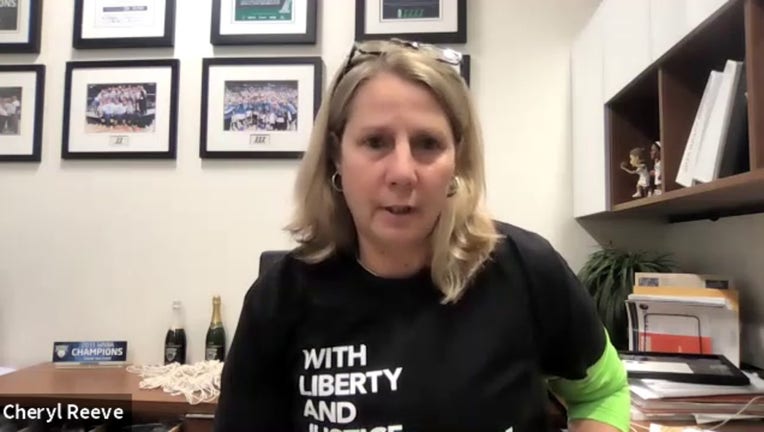 MINNEAPOLIS - Cheryl Reeve and the Minnesota Lynx are preparing for the WNBA Draft on Thursday, but Reeve started her pre-draft media session offering condolences to the family of Daunte Wright, killed in a police shooting on Sunday in Brooklyn Center.

The incident, just like it did with George Floyd’s death in south Minneapolis last Memorial Day, has sparked days of demonstrations and rioting in both Brooklyn Center and Minneapolis. Reeve, sporting a "Liberty and Justice for All" T-shirt and speaking from her office, called it "another senseless tragedy at the hands of police."

Wright died Sunday after officer Kimberly Potter, who resigned from her position on Tuesday, allegedly grabbed her gun instead of her Taser and fatally shot Wright during a traffic stop. She was charged Wednesday with second-degree manslaughter. The incident comes in the middle of the trial for former Minneapolis officer Derek Chauvin in Floyd’s death.

"Each time this happens, this is incredibly painful and heavy. Here we are again, this fight is worth fighting and we’re not going to stop," Reeve said. Each time it happens, it feels like it’s falling on deaf ears. Here we are in 2021 and it’s over and over and over again. We’re going to continue to try to be a part of the solution for all of our communities so that Black and Brown men can drive without fear of being shot and killed at the hands of police."

Reeve went so far as to call for reform with policing and military. Wright, Floyd, Jamar Clark, Justine Damond and Philando Castile have all died at the hands of authorities in the Twin Cities. The Lynx have a social justice committee, "Change Starts with Us," chaired by former player and now coach Rebekkah Brunson. It gives players and staff the option to be active in causes to eliminate racism, and use their platform for positive change.

"Probably the most important thing is know that they’re empowered to do so. The expectation is if they have something to say, they should say it," Reeve said.

The Minnesota Lynx are preparing for the upcoming WNBA Draft.

It’s a different offseason for the Lynx, which was one of the most active teams in WNBA free agency. They added All-Star Kayla McBride, Aerial Powers and Natalie Achonwa. They have just one pick Thursday night, No. 9 overall in the first round.

Reeve said they have up to five names for the pick, and they’ll lock up their draft order before they leave the facility Wednesday. Reeve said due to COVID-19 protocols, she’ll have about half the roster in town next Monday. They have to quarantine starting April 18 and go through testing before starting team activities.

The season-opener is May 14 against the Phoenix Mercury at Target Center. That leaves Reeve less than a month to find a chemistry with a revamped roster.

If they keep the No. 9 pick, Reeve made it clear that player will likely not be asked to do a lot in their rookie season. They just need to be ready when their name is called. They also need to be prepared, mentally and emotionally, to enter a volatile Twin Cities community grieving over recent police killings.

Reeve views it as an opportunity for Minneapolis to enter the national landscape by creating positive change.

"We sure would like to not be noted around the world for what’s happening in our city, but we’re going to be able to be a part of change as a result of it. I sure would like to get to a place where these things aren’t happening," Reeve said. "I want all them to feel empowered to use their voices."