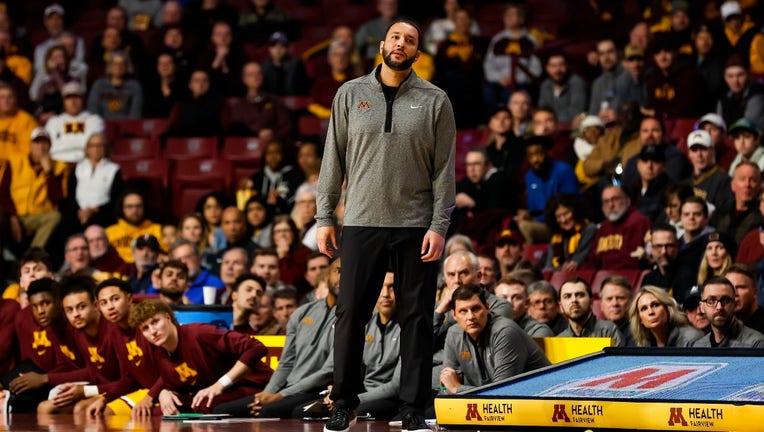 Head coach Ben Johnson of the Minnesota Golden Gophers looks on against the Michigan Wolverines in the first half of the game at Williams Arena on December 8, 2022 in Minneapolis, Minnesota.  ((Photo by David Berding/Getty Images))

MINNEAPOLIS - Ben Johnson warned before the start of the 2022-23 season that the University of Minnesota men’s basketball team might go through some early lumps in his second year as a head coach.

Last year, he had a roster filled with veteran transfers. This year, six of his 12 healthy players are either freshmen or sophomores.

Gophers men's basketball coach Ben Johnson spoke with reporters after Thursday's 90-75 loss to Michigan at Williams Arena to fall to 4-5 on the season and 0-2 in Big Ten play.

Even this might be more adversity than he had in mind. After a 4-1 start, the Gophers lost their fourth straight, fell to 4-5 on the season and dropped to 0-2 in the Big Ten after a 90-75 loss to Michigan Thursday night at Williams Arena. The December Big Ten slate opened on Sunday with an 89-70 loss at Purdue, one of the top teams in the country.

Thursday’s loss is Minnesota’s fourth by double digits this season, just nine games in. Last year, the Gophers didn’t have a double-digit loss until early January.

The Wolverines blitzed the Gophers early, with hot shooting getting them out to a 24-point first half lead. They made eight of their first 10 shots from the field, including their first five 3-pointers.

"The biggest thing to me was just disappointment because it’s not how we practiced the last two days. I’ve got to figure out how we can translate how we practice to how we play," Johnson said after the loss. "In league play, you let anybody shoot 55 percent from three and 52 from the field, you don’t have much of a shot. We’ve got to figure that out."

Stewartville native Will Tschetter, who had scored nine points in five games for Michigan this season, scored six points in the second half and played 13 minutes with family and friends watching from behind the Wolverines’ bench.

Dickinson led the Wolverines with 19 points on 7-of-11 shooting from the field. Dug McDaniel added 15 points and six assists, Kobe Bufkin had 15 points and Jett Howard added 14 points, three rebounds and three assists. Despite losing lead guard Jaelen Llewellyn to a season-ending knee injury earlier this week, the Wolverines still had 10 players score.

"I didn’t think they felt us. They were so comfortable out there, and I didn’t feel like we had any presence defensively. Against a team that’s really talented like they are, you can’t let them just live in their comfort zone," Johnson said. "You’ve got to force misses, you can’t just hope that a team misses. We just didn’t have any presence. Too casual, too easy."

The Gophers shot 49 percent from the field, 6-of-15 from the perimeter and just 15-of-24 at the free-throw line. They also committed 16 turnovers.

"I told these guys this is the highest level, and you can’t hide. We’ve got to be able to find a way to get our mojo back," Johnson said.

"Of course nobody is thinking about getting an L, but we’re built for it. We’ve been playing basketball our whole lives, so it’s a short-term memory, back at it Sunday. It is what it is, we can’t dwell on it," Ola-Joseph said.