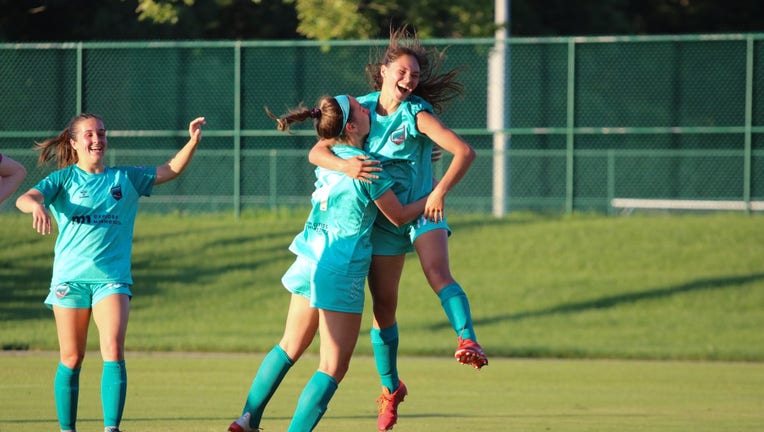 MINNEAPOLIS - Minnesota Aurora FC, in its inaugural USL W season, remained unbeaten through its first three matches and earned a road sweep after a 3-2 win at the St. Louis Lions on Sunday.

Minnesota Aurora is roughly a five-minute stretch in its franchise-opening match against Green Bay Glory from starting the season 3-0. They remain unbeaten, at 2-0-1 after Sunday’s win. They’re also atop the Heartland Division standings with seven points, tied with Green Bay Glory.

Thursday is the kickoff for the Minnesota Aurora, Minnesota's newest women's soccer club. It's the first season for the Aurora and for the league they are in, the USL W. Before Thursday's game, we spoke with Amanda Vandervort, the league's president, about the excitement for the new league.

"It gives the team a lot of confidence that we can go on the road and win games," Minnesota Aurora coach Nicole Lukic said. "And we really appreciate the fans that followed us on the road."

Maya Hansen gave Minnesota Aurora the early 1-0 lead in the 14th minute with her first goal of the season. She won a ball off a centering pass and got a sliding shot past the St. Louis keeper.

About 11 minutes later, Mariah Nguyen gave Aurora a 2-0 lead. Nguyen beat a pair of St. Louis defenders down the left sideline and had her initial shot saved, but buried an open rebound for the goal.

St. Louis scored before the end of the first half to cut the deficit to 2-1 at the break. Minnesota Aurora answered with a goal early in the second half to take a 3-1 lead. MacKenzie Langdok scored a rebound goal, flicking a shot in after Morgan Stone’s header off a corner kick was initially saved.

The Lions scored late in regulation to cut the lead to 3-2, but Minnesota Aurora hung on for its second straight win.

"It feels really good to get the sweep away. It’s really hard to play on the road, especially on Sundays. Sunday games are always hard, last game of the weekend is always a tough one," Langdok said. "I’m really proud of how we battled back and were able to finish it out. Sunday games aren’t usually pretty. It feels really good to come away with a weekend sweep and six points."