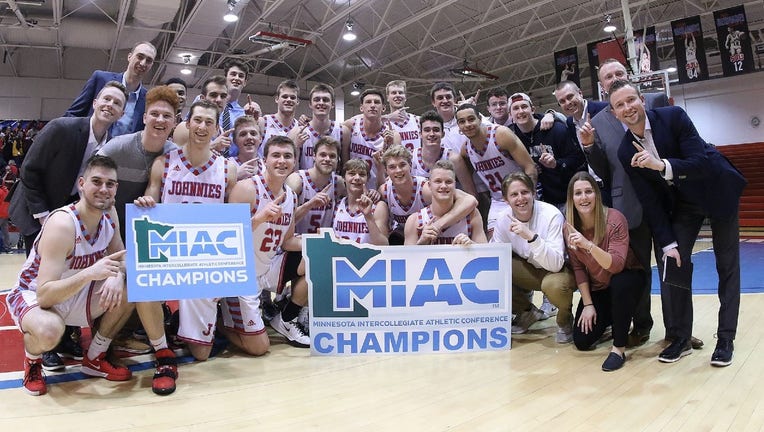 The St. John's basketball team was set to host rival St. Thomas in the Sweet 16 before the NCAA canceled the Division III Tournament due to the Coronavirus pandemic. ((credit: St. John's University Athletics))

MINNEAPOLIS - The Minnesota Intercollegiate Athletic Conference on Wednesday announced its plans for a modified winter sports season in basketball, hockey, indoor track and field and swimming and diving.

MIAC officials canceled the fall sports season due to the COVID-19 pandemic, after winter championships and the spring season were each canceled due to the global health pandemic.

Basketball and hockey teams can start playing games as soon as Jan. 29. Teams are allowed to play as many as four non-conference games. Conference play can begin as soon as Feb. 6, and all teams will play a seven-game schedule. League officials say there will not playoffs or championship meets for winter sports, but individuals and teams who qualify for an NCAA Tournament can compete.

In hockey and basketball, the teams that finish with the best record and played at least 51 percent of their games automatically qualify for the NCAA Tournament. Basketball games will be played at 7 p.m. on Wednesdays and 2 p.m. on Saturdays, with hockey games set for 7 p.m.

MIAC officials said indoor track and field meets, and swimming and diving competitions will be held at the discretion of each school. There is no regular season schedule for either sport, and there won’t be championship meets.

League officials did not have information on 2021 fall sports, or an update on the football season.