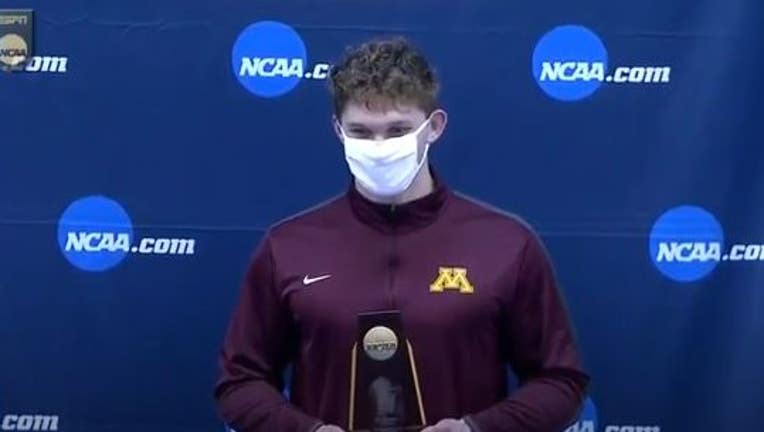 (FOX 9) - On Saturday, junior Max McHugh became the first swimmer in the history of the University of Minnesota men's swimming and diving program to ever earn two titles in one NCAA Championship.

McHugh earned the titles after out touching the rest of the 200 breaststroke field during Saturday’s finals session. According to the university's athletic department, McHugh did so in a time of 1:49.02, the fifth-fastest in history, while also breaking his own Minnesota school record in the process.

"I’m thrilled with how this week went," McHugh said in a release. "The coaching staff and I prepared all year for this meet and it’s exciting to see it all come together. Happy with the meet, but I’m just looking forward to getting back in the water and training for the Olympic Trials this summer!"

Friday night, McHugh entered the night’s finals session as the second overall seed with a prelim time of 1:50.88, just over a full second behind the University of California’s Reese Whitley. Opening with a 52.16 split time over the first 100 yards, McHugh held a 0.06 second lead over Whitley before ultimately closing out the race with a 56.86 split to outtouch the Cal swimmer by just over half a second.

According to the university, Saturday’s winning performance marks the second of any Gopher men’s swimmer in the past 57 years.

Overall, the Gophers finished 21st at this year's national championships with 40 points.