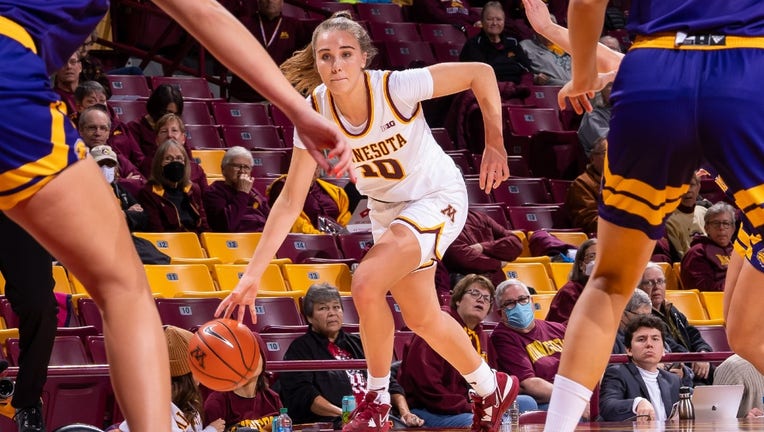 Mara Braun had 21 points in her Minnesota debut as the Gophers' women's basketball team opened the 2022-23 season with a 75-45 win over Western Illinois Monday night at Williams Arena. (University of Minnesota Athletics)

MINNEAPOLIS - Led by three local standouts in the starting lineup, the University of Minnesota women’s basketball team opened the 2022-23 season with a 75-45 win over Western Illinois Monday night at Williams Arena.

Heyer had eight points and eight rebounds in 29 minutes, and Battle had six points, eight rebounds, nine assists and two blocks in 23 minutes off the bench.

After playing UW-River Falls in an exhibition, Monday night was the first game for 10 Minnesota players on the roster that counted towards the season standings.

"It was exciting. The exhibition game was fun, too. But this game, knowing it goes towards the record, it's for real this time? Super exciting," Braun said. "A little nervous at first. But once we got things rolling it was kind of smooth sailing from there."

Alanna Rose Micheaux had a historic night for the Gophers in the win, with a double-double of 14 points and 13 rebounds in 27 minutes. She became the second player in the last seven seasons to record a double-double in the season opener.

"I've been talking about people not knowing what's cooking in the kitchen. Obviously we came out with a full-course meal," Micheaux said.