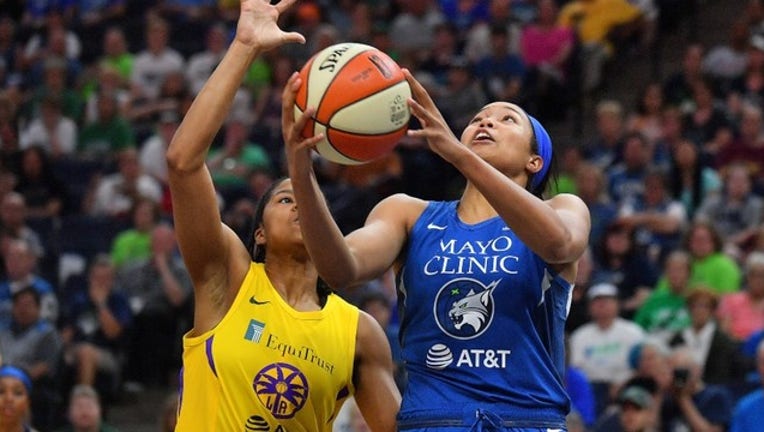 Napheesa Collier #24 of the Minnesota Lynx shoots against Tierra Ruffin-Pratt #10 of the Los Angeles Sparks during their game at Target Center on June 08, 2019 in Minneapolis, Minnesota. (Photo by Sam Wasson/Getty Images)

MINNEAPOLIS (FOX 9) - The Minnesota Lynx will have a third player participating in the WNBA All-Star Game festivities.

The Lynx announced Monday that rookie forward Napheesa Collier has been named an injury replacement. Collier will replace A'ja Wilson of the Las Vegas Aces, who won't play in the game due to an ankle injury.

Collier becomes the first Lynx rookie to participate in the WNBA All-Star Game since Maya Moore, and the fourth rookie in Lynx history. Collier will join teammates Sylvia Fowles and Odyssey Sims, who were name WNBA All-Star reserves last week.

Collier is off to an impressive rookie season with the Lynx. She's averaging 11 points per game on 44.2 percent shooting from the field, 5.9 rebounds and 2.3 assists per game. She's third among rookies in scoring and second in rebounding. Collier scored 27 points in her first game, the second-highest ever in a WNBA debut.

It's the seventh time in Lynx history they've sent three players to the WNBA All-Star Game. The Lynx are the only WNBA franchise to have at least three All-Stars seven times.