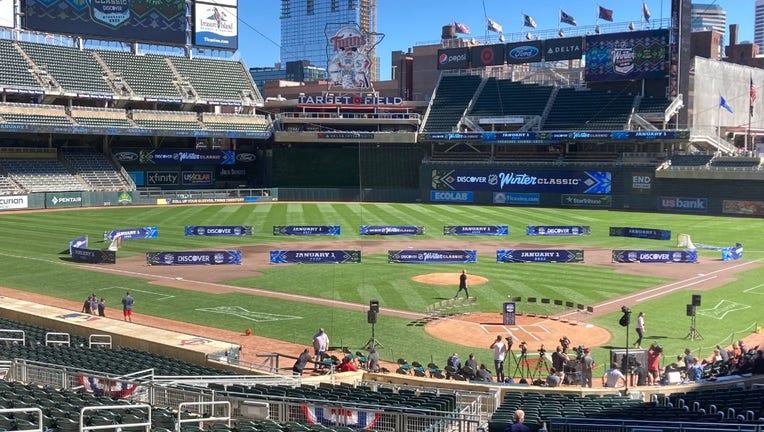 The NHL on Monday held a media event to announce details for the 2022 NHL Winter Classic on Jan. 1, 2022, between the Minnesota Wild and St. Louis Blues at Target Field.

MINNEAPOLIS - The NHL announced Monday that a limited amount of tickets for the 2022 NHL Winter Classic will go on sale at 10 a.m. Wednesday, via Ticketmaster.

NHL Commissioner Gary Bettman announced at a news conference at Target Field that the Minnesota Wild and St. Louis Blues will face off at 6 p.m. on New Year’s Day. It’s the first NHL Winter Classic game to be played in prime time.

The Winter Classic is coming to Minnesota, set to be held at Target Field.

It’s the second time the Wild is playing in an NHL outdoor game, having beaten the Chicago Blackhawks 6-1 at what was then TCF Bank Stadium in the 2016 NHL Stadium Series.

"Target Field is magnificent and when I think ahead three months to New Year’s Day, I have no doubt we will transform this magnificent stadium into something that will not be recognizable for baseball, but certainly will be for hockey," Bettman said. "Outdoor hockey is synonymous with Minnesota. This is the State of Hockey."

"I think it’s huge. Everything this city has gone through in the last year and a half, just to bring people together around something that’s so popular here, like hockey here in the Twins’ stadium, downtown Minneapolis, it’s going to be great for our community and seeing people come together," Dumba said.

Media got a look at how the outdoor rink will be set up for the Jan. 1, 2022 game. The boards for the rink itself will be set up behind the pitcher’s mound and in the infield.

"We’re so happy it’s here. We’re going to be in a full stadium and it’s going to be a lot of fun. Our players are really going to enjoy the experience," Leipold said. "To get awarded this and all the excitement that comes with it, is going to be great for everything. To say we’re proud that they’re coming is an understatement. We are incredibly excited."

The Wild finished a busy offseason last week by signing star forward Kirill Kaprizov to a five-year, $45 million contract. It makes Kaprizov the highest-paid player in franchise history, and one of the highest-paid forwards in the NHL.

Kaprizov won the Calder Trophy, given to the league’s top rookie, after leading the Wild with 27 goals and 51 points in 55 regular season games. Guerin also bought out the contracts of veterans Zach Parise and Ryan Suter in the offseason, and brought back Kevin Fiala on a one-year deal.