Taking the court for the first time since he lost his mother and several other family members to COVID-19, Karl-Anthony Towns was in tears during warm-ups.

MINNEAPOLIS (FOX 9) - Taking to the court for the first time since losing his mother and other close family members to COVID-19, Karl-Anthony Towns was in tears during pre-game ceremonies.

Saturday night, as players were announced at the Target Center for the Wolves preseason opener versus the Grizzlies, Towns was seen sitting on the bench in tears. Coaches, staff, and his teammates all moved to comfort Towns as the Wolves center tried to wipe away tears. 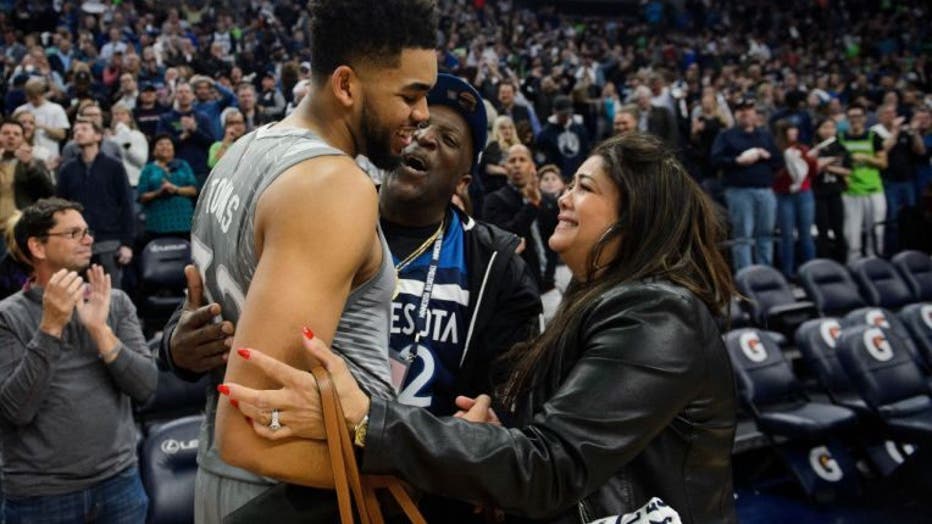 Karl-Anthony Towns #32 of the Minnesota Timberwolves hugs his parents, Karl and Jackie Towns after winning the game against the Denver Nuggets of the game on April 11, 2018 at the Target Center in Minneapolis. (Hannah Foslien / Getty Images)

Saturday was the first time the team has played since the NBA's COVID-19 shutdown in March. Shortly after, his mother passed away in April. Since that point, he's also lost six other close family members. Speaking during training camp, Towns explained how important it was to see his mom on the sidelines as he played basketball.

"I played this game more because I just love watching my family members see me play a game that I was very successful and good at," Towns explained earlier this month. "It always brought a smile for me when I saw my mom at the baseline or in the stands having a good time."

"I've lost a lot," Towns lamented. "Close family members, people who have raised me, who have gotten me here."

When asked if basketball could provide a sort of therapy for him, Towns said he didn't see it that way.