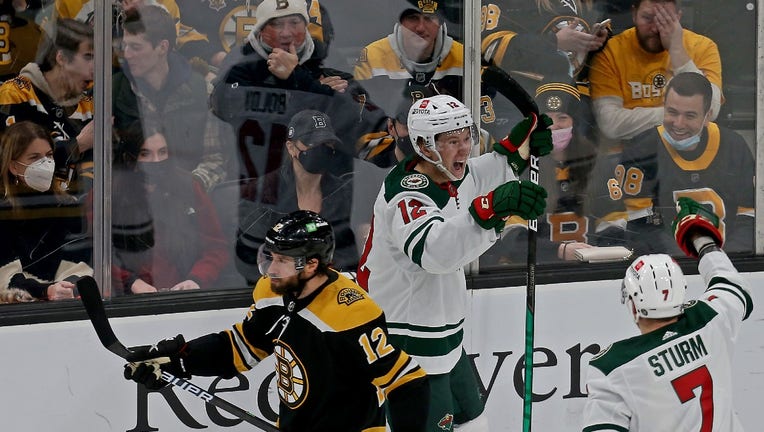 Matt Boldy #12 of the Minnesota Wild celebrates his goal with Nico Sturm #7 as Craig Smith #12 of the Boston Bruins skates off during the second period of the NHL game at the TD Garden on January 6, 2022 in Boston, Massachusetts.  ((Staff Photo By Matt Stone/MediaNews Group/Boston Herald))

MINNEAPOLIS - The Minnesota Wild snapped a five-game losing streak with a 3-2 win at the Boston Bruins Thursday night, but it came at a price with star Kirill Kaprizov leaving the game injured.

Kaprizov, who scored a goal in the win, took a nasty hit into the boards from Trent Fredric after getting tangled up with Matt Grzelcyk during the second period. Kaprizov skated slowly to the bench, favoring his right shoulder and went immediately down the tunnel into the locker room. He was declared out for the game before the third period with an upper body injury.

The Wild also got goals from Nico Sturm and Boston native Matt Boldy, who was making his NHL debut with Minnesota. Boldy had several family and friends in attendance, and many of his former Boston College teammates were in a suite at the game. Boldy’s goal in the second period gave the Wild a 3-1 lead, and ended up being the game-winner.

Kaapo Kahkonen, playing for the injured Cam Talbot, made 36 saves and a big one with 1.7 seconds to play, to seal the win in regulation for the Wild.