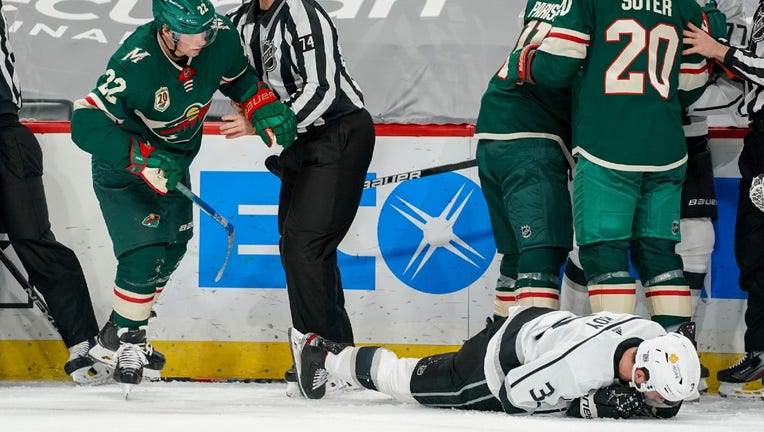 Minnesota Wild Right Wing Kevin Fiala (22) attempts to check on Los Angeles Kings Defenceman Matt Roy (3) after he hit him from behind into the boards. Fiala would get a game misconduct penalty and Roy would not return to the game as a result of the ((Photo by Nick Wosika/Icon Sportswire via Getty Images))

MINNEAPOLIS - The Minnesota Wild was on a power play and Kevin Fiala was trying to steal the puck last Thursday night, before Matt Roy of the L.A. Kings could clear it.

Fiala came flying in, couldn’t stop fast enough and smashed Roy head-first into the boards. It was the second period of a game the Wild would win 5-3, but Fiala’s night was over. He was assessed a five-minute major for boarding, and a game misconduct.

The following day, Fiala heard from the NHL Player Safety panel. He was suspended three games for the hit. The Wild went 1-2 over that stretch, which ended with Minnesota losing at Colorado 2-1 Tuesday night.

Dean Evason said Wednesday it wasn’t a dirty play, but it serves as a learning experience for the 24-year-old.

"There’s a balance for Kevin, a balance of playing on the edge, playing with a chip and not taking it over the edge and taking undisciplined penalties. We don’t believe the hit was intentional, obviously it was a circumstance where they came together. But he was playing with some bite, he was playing the game with a lot of pace," Evason said.

The next time the Wild takes the ice, Fiala will be back on it with his teammates. They’ll welcome him back with open arms. Marcus Foligno is on the NHL’s COVID-19 list, and Matt Dumba and Marcus Johansson are out with injuries.

Fiala has never been suspended before, and doesn’t intend to make a habit of it. He said he misses the game after nearly a week off, and is ready to play.

"It is what it is. It’s a bad hit, it looks bad. It is what it is, now it’s done with, three games, now we can look forward," Fiala said. "It’s always tough to watch your teammates play without you."