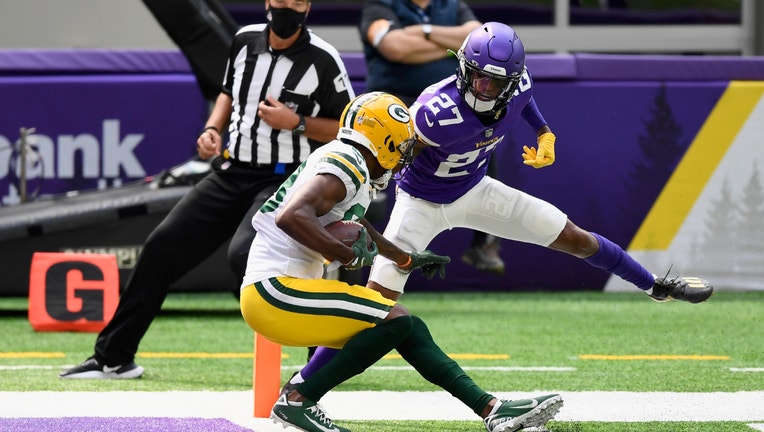 Marquez Valdes-Scantling #83 of the Green Bay Packers carries the ball against Cameron Dantzler #27 of the Minnesota Vikings during the second quarter of the game at U.S. Bank Stadium on September 13, 2020 in Minneapolis, Minnesota. Valdes-Scantling ((Photo by Hannah Foslien/Getty Images))

MINNEAPOLIS - The Minnesota Vikings held essentially a walk-through on Wednesday as they get ready to face the Dallas Cowboys coming off Monday Night Football, and they appear to be getting healthier.

After not practicing all of last week, tight end Irv Smith Jr. (groin) and defensive back Cameron Dantzler (concussion) were limited in practice at TCO Performance Center. Smith had two touchdowns in Minnesota’s win over the Detroit Lions, and has made strides blocking in the run game.

Dantzler had to be taken off Lambeau Field on a stretcher and was evaluated for a concussion. He also did not travel with the team to Chicago due to COVID-19 concerns.

The Vikings could get back to .500 on the season at 5-5 with a win over the Cowboys on Sunday.