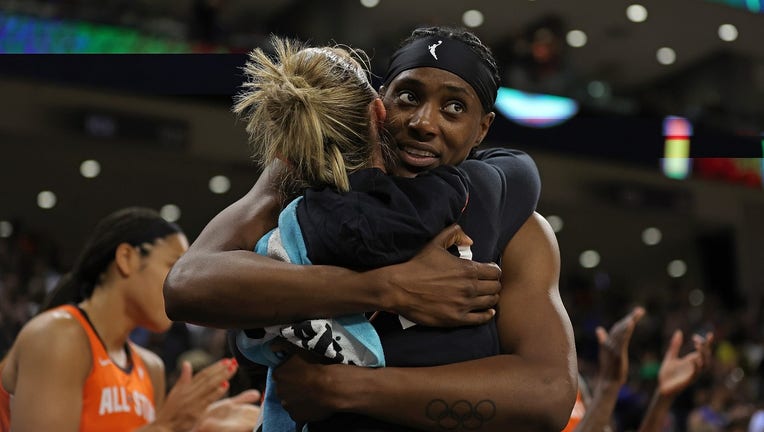 Sylvia Fowles #34 and Courtney Vandersloot #22 of Team Wilson hug during the 2022 AT&T WNBA All-Star Game at the Wintrust Arena on July 10, 2022 in Chicago, Illinois.  ((Photo by Stacy Revere/Getty Images))

MINNEAPOLIS - Sylvia Fowles doesn’t like being in the limelight, and has never really enjoyed being the center of attention whether it’s on the basketball court or in the community.

For at least one more time, the Minnesota Lynx star center will be the center of attention. The Lynx host the Seattle Storm Friday night at Target Center in what will be their final regular season home game. In her 15th season, it will be the last home game for Fowles in a Lynx uniform. She announced before the season this year would be her last in professional basketball.

After 15 WNBA seasons and eight with the Minnesota Lynx, Sylvia Fowles is retiring after this season and will play her final game at Target Center Friday night.

Speaking with reporters on Monday, Fowles, 36, was candid in admitting she has mixed emotions about the day ahead. The Lynx are still battling for the last spot in the WNBA Playoffs with three games to play.

"Of course I want to have fun and focus on trying to get a playoff spot, but at the same time you want to be respect the people that’s coming out to support and who’s been supporters and who just love me and my game," Fowles said. "Of course it’s going to be emotional, but I’m just looking to have a good time and let my emotions flow. Whatever I feel, I’m just going to let it flow out."

The talk both entering the season and during the summer from Cheryl Reeve and Lynx players has centered around sending Fowles out with a WNBA title. They have some work to do to lock up a postseason spot. They’re 13-20 and in the No. 9 spot in the league, with the top eight teams making the playoffs.

They face the No. 8 team, Phoenix, Wednesday night. Fowles said she didn’t pay much attention to trying to end her career in the playoffs. She just wanted to play, and be a good teammate.

"I didn’t think about myself coming in here and sending myself out on a good note. My biggest thing was how can I teach my teammates how to deal with Cheryl? How can they cope, how can they be good teammates to each other? That was my biggest thing coming into this season, but personally I wasn’t thinking about playing in the playoffs or making it to the championship," Fowles said. "My thing is how can I be a great teammate and pass on the knowledge that I’ve learned over the last couple years throughout this league?"

Fowles’ basketball career speaks for itself. She won a pair of WNBA titles with the Lynx in 2015, and 2017. She won WNBA Finals MVP both of those years, won the league’s MVP award in 2017, is an eight-time All-Star, three-time All-WNBA First Team, four-time WNBA Defensive Player of the Year and seven-time All-WNBA Defensive First Team.

So what made her so successful with the Lynx after being traded to Minnesota in 2015? In her words, liking her teammates and a candid, honest relationship with Reeve.

"I can recall talking back to Cheryl before I got here, and one of my biggest things was don’t bull**** me. Give it to me straight, when I’m not doing my job let me know that I’m not doing my job and she also wanted the same in return," Fowles said. "I think throughout my years here that’s why I’ve been so successful, because I’ve had that open dialogue with her and I’m allowed to say whatever I need to say and she’s allowed to say whatever she needs to say without there being any hard feelings."

Every city the Lynx have traveled to, there’s been a send-off of sorts for Fowles. But it hasn’t been the season Minnesota wanted. The team has battled injuries most of the season, Fowles included, and had been without star Napheesa Collier the entire season until Sunday after she had her first child. The Lynx started 1-5, and fell to 4-14 after a June 19 loss to the Las Vegas Aces gave them their longest skid of the season at five games.

The Lynx responded by winning six of their next eight, and have won three of their last four with three games left to at least give themselves a chance at getting to the playoffs.

"Everything is not going to be perfect. I wouldn't have expected our season to go like this, but at the end of the day I am grateful to go through these challenges because I’m still learning about myself and how I can be better," Fowles said.

Fowles said her only goal Friday is to get one last win in front of the home crowd at Target Center. She knew going into this season it would be her last, regardless of how it ended.

"I knew last year when I didn’t want to work out and be in basketball shape, it was the right time for me. When I got to that point when workouts getting harder and harder, I just don’t think physically I want to do it to my body anymore. That’s how I knew," Fowles said. "I’m leaving on my terms. I’m very content with the decision I’ve made and I’m happy to look at what life brings after basketball."

Life after basketball will feature traveling without a schedule, and pursuing a career in mortuary science. She has two job offers waiting in Florida, pending completion of her board exam.