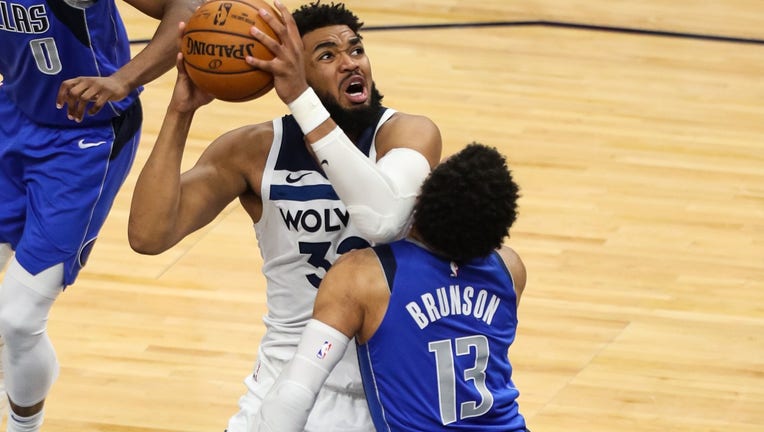 Karl-Anthony Towns #32 of the Minnesota Timberwolves commits an offensive foul against Jalen Brunson #13 of the Dallas Mavericks in the fourth quarter of the game. The call was challenged and upheld at Target Center on May 16, 2021 in Minneapolis, Mi ((Photo by David Berding/Getty Images))

MINNEAPOLIS - The Minnesota Timberwolves beat the Dallas Mavericks 136-121 on Sunday at Target Center, and it brings another regular season to an end without a trip to the playoffs.

The Wolves finished 23-49 and won’t be involved in the postseason for the 15th time in the last 16 years. They’ve made one playoff appearance since Kevin Garnett led the franchise to the Western Conference Finals in 2004. It could’ve felt like the end of another lost season, but the Wolves are looking at it as the start of a new era after beating a playoff team in the Mavericks to end the season.

After starting 2-0, Karl-Anthony Towns went down with a broken left wrist. The Wolves lost seven straight, and 11 of 12. Before we knew it, Minnesota was 7-24 and Ryan Saunders was fired as head coach. Chris Finch stepped in, and without much of a culture or identity established, the Wolves finished 16-25.

There is a long way to go, but the franchise feels it has the pieces to move forward in Towns, D’Angelo Russell and No. 1 overall pick Anthony Edwards. The team spoke about the future on Monday, after having exit meetings with coaches and staff.

"I see what we’re capable of doing as a team. For me, the offseason started now. It started last night when the game was over, I’m ready to work," Towns said. "I see what we can be, so I gotta put the work in and do my job so I’m ready for next season, help this team get to a playoff spot. The work just started."

Finch called his season "a whirlwind for sure," going from being a Toronto Raptors assistant to Wolves head coach in a matter of days. It's now his job to mesh the talent the Wolves have, and turn it into a consistent winner.

"We’ve got high-caliber individuals, high-caliber players that we’ve got to continue to cultivate. That’s our mission right now is to try to develop these guys. I was really excited about some of the things we saw in flashes. But flashes don’t get it done in the NBA, it’s got to be consistent," Finch said. "We’ve got to be much more of an every night team. That’s what we’re trying to do."

Gersson Rosas said Monday afternoon the future for the organization started the second he brought Finch in.

"We’re in our new season, we’re preparing accordingly, there’s a major urgency to build on what we just finished off this season," Rosas said.

A TOUGH YEAR FOR KAT

There’s no denying it was a tough season for Towns. Two games in, the Wolves were 2-0 but would go on a long skid after he fractured his left wrist. He missed six games, deciding to come back early from an injury he says takes about six months to recover from. Then in January, he tested positive for COVID-19 and missed 13 games.

The same virus that took his mother’s life two years ago took him away from the basketball court. He finished the season playing 50 of 72 games, averaging 24.8 points, 10.6 rebounds and 4.5 assists per game. He said he watched the NBA Hall of Fame inductions over the weekend, including former Timberwolves’ star Kevin Garnett. He maintains despite trade rumors over the last few seasons, he wants to play his entire career in Minnesota.

"I hope to have a career like Kobe, one team, like Tim (Duncan) and Kobe where it’s one team and try to bring as many championships as possible. I’m just happy that I’m able to stand strong here in Minnesota," Towns said.

What is clear for the Wolves and their immediate future is that it revolves around a big three of Towns, D’Angelo Russell and No. 1 overall pick Anthony Edwards. On Monday, Edwards earned his third straight Western Conference Rookie of the Month honor. He’s the favorite to win NBA Rookie of the Year. In eight games in May, Edwards averaged 27 points, 5.5 rebounds and 4.8 assists per game. He shot better than 40 percent from the perimeter. That includes a season-high 42 points against Memphis on May 5.

He finished the season averaging 19.3 points, the most by a rookie in franchise history. Most importantly to him, he played in every game and started 55 of the 72.

"I feel like the best ability is availability. I take pride in playing my games, I don’t know who is in the stands watching. I want to make sure I’m on the floor if I can be," Edwards said.

Edwards became a budding star in the league as a rookie, and said one of his goals next year is to be an NBA All-Star. Rosas knew he had a talented player with the top overall pick, but even he's surprised by how Edwards blossomed.

The Timberwolves finished their last 20 games 11-9, with Towns and Russell on the floor together consistently. The franchise could’ve fallen back and improved their chances to keep a top-three pick in the 2021 NBA Draft. Instead, they focused on winning, building a culture and looking at what the future could hold under Towns, Russell and Edwards. When all three were healthy, which wasn’t often enough, we saw the potential.

So how can all three exist together? Towns says leave your ego at the door.

"It’s pretty simple, I just think we can’t let the egos get in the way. We’ve got to put our egos to the side at all times, we can’t let that get between us. We can’t have that be another story of amazing talents coming together and not making it work. We can’t be a story like that," Towns said.

Malik Beasley was having the best season of his career before having to serve a 12-game suspension by the NBA for a September 2020 arrest outside his Plymouth home. Then shortly after returning, Beasley suffered a hamstring injury that kept him out the last 23 games. He ended up playing just 37 of the 72 games, averaging 19.6 points, 4.4 rebounds and 2.4 assists per game. He shot nearly 40 percent from the perimeter.

Beasley will serve a 120-day sentence from his arrest at his home. It won’t be an excuse for not staying in shape. In the months after the incident, he signed a four-year, $60 million contract to return to Minnesota.

"Nothing will affect my ability to get better, whether that’s at home or anywhere else. I’m always going to make sure I work mentally or physically. There’s still going to be room for improvement and nothing is going to change. I’m going to work hard continuously and get ready for next season," Beasley said.

They spent 2020-21 revamping the roster, changing head coaches and now the franchise has new ownership in Alex Rodriguez, Marc Lore and potentially Garnett. The expectations for 2021 are much clearer, and much higher: They want to compete for a playoff spot.

"That’s not even to talk about. We’re definitely going to make a strong push for the playoffs next year. I’m ready to go to the playoffs. I want to get that feeling next year," Edwards said.