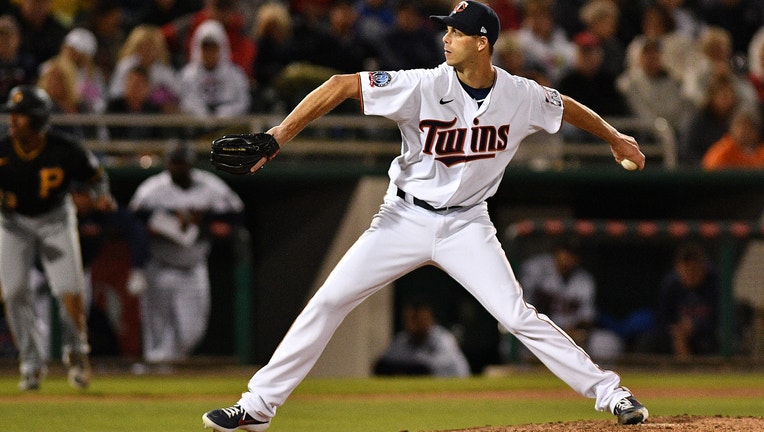 Taylor Rogers #55 of the Minnesota Twins delivers a pitch during the spring training game against the Pittsburgh Pirates at Century Link Sports Complex on February 29, 2020 in Fort Myers, Florida. ((Photo by Mark Brown/Getty Images))

Taylor Rogers has a unique pitching motion. Former Twins catcher Bobby Wilson once called it “his little rushed delivery,” a compliment that only sounds backhanded. Interestingly, when one delves into the details of that delivery, the dominance of Rogers’s newest pitch comes into focus, but so do his vulnerabilities.

By now, the story of Rogers’ transformation from fringy lefty specialist to formidable relief ace is familiar to nearly all Twins fans. During the first third of the 2018 season, Rogers tinkered with a new offering, a slider, which he then incorporated as an extra look for hitters hoping to lock in on his sinker and curveball. Since he became comfortable using that slider, he’s been one of the best relievers in baseball.

Despite Wilson’s characterization, there’s certainly nothing rushed about the initial phase of Rogers’ delivery. On the contrary, the first notable thing about Rogers’s mechanics is the long path his arm traces while it’s working behind his body. When he first brings his throwing hand out of his glove, he stabs it down and backward, behind his back, toward the shortstop. Then, as he drives forward and his hips rotate, his arm rapidly comes up and through, but flexes only very briefly.

Rogers naturally stays extended for much of his delivery, right through release point. That has big implications when we begin to consider the addition of the slider to his repertoire, at first as a third pitch, then as his primary breaking ball.

“On the curveball, you’re actually trying to tuck the arm and decrease the radius of the arc, which increases the spin—whereas on the slider, you maintain a full arm length and full follow-through,” then-Red Sox pitching analyst Brian Bannister told Tyler Kepner, for Kepner’s 2019 book on pitching. “All the spin [on the slider] is created by the wrist and fingertips.”

That’s the key to understanding Rogers’s slider, and the ease with which he was able to incorporate it. Rogers told Dan Hayes of The Athletic that he grips the slider the same way he grips his curve, which eliminated any discomfort or confusion during that step of the process. The only real difference in the way he throws the pitch, then, is in the arm action itself. For a hurler with a relatively low natural arm slot and such natural extension in his motion, that makes the slider a more natural pitch, for reasons summed up by Bannister: that extension suits the pitch better than a true curve.

By no means, however, has Rogers stopped throwing the curve, and in fact, his curve has been as effective as ever since he added the slider. For that, Bannister (at least in his interview with Kepner) can’t offer us an explanation.

“Two totally different approaches, which is why some guys throw sliders well and some guys throw curveballs well and why most guys struggle to throw both,” Bannister said. “Somebody like Clayton Kershaw is very rare, to throw elite versions of both.”

Is Kershaw a fair comparison point for Rogers? Not really. It’s not fair to compare much of anyone to Kershaw. However, Rogers had a 69 cFIP and a 57 DRA- last season, according to Baseball Prospectus, suggesting he was somewhere between 30 and 40 percent better than an average pitcher, on a rate basis. Those are very close to the aggregate figures Kershaw posted from 2011 through 2013—not quite at his true peak, but when he was already winning Cy Young Awards, and even an MVP.

Rogers gets near Kershaw’s level of batter-for-batter effectiveness partially by not having to face batters multiple times in one game, but also by having one breaking ball (the slider) which is essentially just a combination of his other breaking ball (the curve) and his fastball: he grips the pitch like his curve but throws it like his fastball. In so doing, he works around the problem Bannister articulated: he can have two different approaches and two different breaking pitches, without either compromising the other.

That’s not to say Rogers is a perfect pitcher. There is, after all, a reason why he’s not a dominant starter, like Kershaw. The aforementioned “rushed” element of his delivery can create deception for hitters, especially now that he has multiple breaking pitches, and especially because both pitches have wider-than-average velocity separation from his fastball. However, it also makes him vulnerable to missing high and to his arm side, because his arm sometimes isn’t on time at release.

Nearly every pitcher experiences that mistiming of release on occasion, and many hurlers have bigger problems than Rogers does because of it. In many cases, that mistiming (which creates misses within a predictable band; imagine a scatter plot of locations mapped across the strike zone, shaped like the pitcher’s arm slot) is compounded by instability or misalignment in other elements of the delivery. That can lead to more and bigger misses.

Very few pitchers in baseball can match Rogers, though, for consistent alignment and stability. As he drives down the mound, he drags his back foot longer than most pitchers, then turns the heel of that foot toward first base, keeping the back leg on line even a split-second longer. It’s an unusual motion, but it gives him tremendous balance and stability as he releases the pitch and follows through. Because of that foot drag, and because he’s increased his core strength to generate more stability in his upper half, he’s as reliably on target in everything but release point as any pitcher in the game.

Even that superlative comes with a catch. Rogers’ extraordinarily low walk rate last year bespeaks his excellent control, and that’s likely to be a sticky skill for him — especially now that he’s found a second breaking pitch that he can throw for strikes or get hitters to fish for. However, pitchers who miss only because of those minute mistimings can sometimes be more hittable, and given the nastiness of Rogers’ stuff, that tendency to miss in hitter-friendly spots is the only good explanation for the above-average rate at which hitters barreled him up last year.

On the whole, Rogers has plenty of tools to avoid being hit hard. His sinker has great run to the arm side, and usually induces ground balls. The twin breaking balls keep hitters off-balance and will help him miss bats when he needs to do so. He might always give up more home runs than is ideal, especially for a relief ace (with that role’s inherently minuscule margin for error), but making the adjustments necessary to reduce that vulnerability almost certainly wouldn’t be worth the lost ability to manipulate a pair of breaking balls and pound the zone as no one else in baseball can.