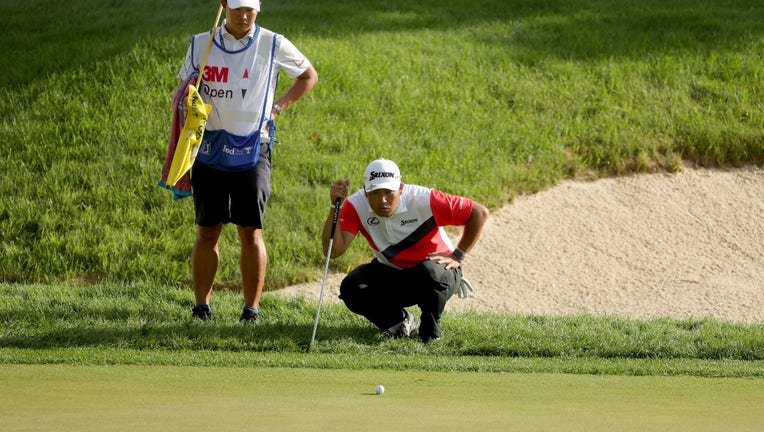 Hideki Matsuyama of Japan lines up a putt on the 12th green during the first round of the 3M Open at TPC Twin Cities on July 21, 2022 in Blaine, Minnesota.  ((Photo by Stacy Revere/Getty Images))

MINNEAPOLIS - Hideki Matsuyama is one of the biggest names at TPC Twin Cities in Blaine this week for the 3M Open, but his first round got off to a tough start Thursday morning.

The No. 14-ranked player on the World Golf Rankings was 1-over par on his opening nine, until he got to the par-5 No. 18. It was one of the toughest holes on the PGA Tour last season, and it was a blow-up hole for Matsuyama on Thursday.

Hitting seven, he launched an approach shot over the green that caromed off the grandstand. After getting relief from a drainage ditch, he hit the pin with his chip shot and made the short putt for a nine.

The 18th hole at TPC Twin Cities is very much a risk-reward hole, where tour pros can get to the green in two and go for eagle if their drive lands in the fairway. But a result like Matsuyama’s, and the tournament can get away in a hurry.

Matsuyama was the highest-ranked player in the World Golf Rankings, at No. 14, to come to the 3M Open. Now, he's out after just 18 holes.