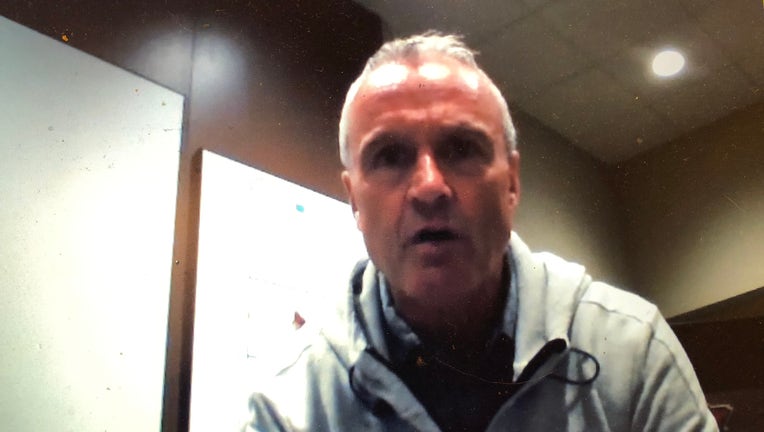 Minnesota Wild interim coach Dean Evason spoke Thursday about practice at TRIA Rink as training camps for the NHL could open as early as Monday.

MINNEAPOLIS - The Minnesota Wild could being training camp at TRIA Rink for the NHL’s 24-team playoff as early as Monday, provided the players sign off on the league’s return-to-play plan on Friday.

One guy that will be ready regardless of the circumstances, and there have been plenty this season, will be interim coach Dean Evason. He’s already drawn up practice plans and had video put together in anticipation of a full-team practice on Monday.

In the past few weeks, the Wild have had small-group sessions, on and off the ice, at TRIA Rink and are abiding by NHL and local Covid-19 guidelines. Players and staff expected to be on-site take their temperature every morning, they wear masks, there are labels on the floor at the rink to serve as reminders for social distancing and most importantly, they’ve already been tested for Covid-19 before getting to the rink.

Evason is impressed with what he’s seen at TRIA Rink so far. Players are mixing the joy of getting back on the ice with getting their mind right to compete.

“Just watching the practices, I’ve been very impressed with how professional the guys are. I guess I shouldn’t expect anything more, but you come into this and the guys aren’t fooling around out there,” Evason said. “They’re having fun, but they’re working so that’s exciting for us as a coaching staff.”

The Wild was on a roll when Evason took over as interim coach after Bruce Boudreau’s firing. Evason was 8-3-1 in 12 games as the new head coach, and the Wild was 7-3 and one point out of the playoffs when the NHL suspended play due to Covid-19.

Zach Parise said Wednesday the team’s pace changed when Evason took over. They played faster, made more plays on offense and didn’t have to defend the entire game.

Evason is hoping it doesn’t take long to get that form back when training camp starts, and when they get closer to heading to Edmonton. They’ll start with skating and conditioning, work on structure and rely on scrimmages to get the competitive flow back. When play starts without fans in Edmonton, they’ll have to generate their own energy.

Evason isn’t worried about that.

He may have to figure out who his goalie will be. In 30 games this season, Devan Dubnyk was 12-15-2 with a 3.35 goals against average and .89 save percentage. Both numbers are below his standards, but he also had to spend time way from the Wild this season as his wife battled health issues.

Alex Stalock stepped in and went 20-11-4 in 38 games, including posting four shutouts, while maintaining a 2.67 goals against average and .91 save percentage.

So who gets the start in Game 1 against Vancouver? Evason says they’ll determine that.

“No different than a regular training camp of who starts Day 1. It’s how they perform and we’re going to have plenty of opportunity to see them practice, in game situation, how they’re playing the game and we’ll make an evaluation as a group,” Evason said.

Evason might also be coaching for his job, especially if the Wild win games early and extend their season. But he’s largely not focused on that, he’s locked in on preparing to win games.

“My feeling is I’m one of the luckiest guys in the world to be sitting here talking to you guys. Even if my job, there’s an interim in front of it, I’m a head coach in the NHL. I say that a lot to the guys when I walk into the room and they say how you doing? I’m doing awesome, what would I have to complain about? I’m coaching in the NHL and you’re here and it’s a pretty unique situation and a pretty unique job and a pretty special job. I don’t take any of that for granted and know that I’m very fortunate to be in this spot,” Evason said.

So what’s his message to the team when training camp presumably starts on Monday? Go play, and play the same way. Regardless of a global health pandemic, a championship is still at stake.