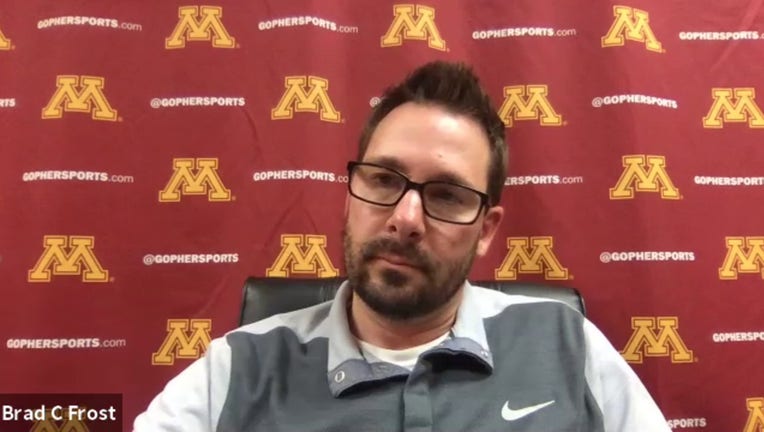 Gophers women's hockey coach Brad Frost reacted Sunday night to Minnesota being left out of the NCAA Tournament for the first time since 2007.

MINNEAPOLIS - In a state of shock, baffled and disappointed. University of Minnesota women’s hockey coach Brad Frost, and his team, had a range of emotions Sunday night as they watched the pairings come out for the NCAA Tournament.

For the first time in 13 seasons, Frost and the Gophers didn’t get an at-large bid and won’t get the chance to compete for a national championship. The eight-team field included automatic qualifiers Robert Morris (CHA), Colgate (ECAC), Northeastern (Hockey East) and Wisconsin (WCHA). The at-large bids went to Ohio State, Boston College, Minnesota-Duluth and Providence.

Frost and his team gathered Sunday night expecting at worst to be the No. 5 seed. Instead, their season is over with an 11-8-1 record.

"Honestly I’m in a little bit of shock. It’s just the ultimate kick in the teeth after this year, gotta be honest with you," Frost said Sunday night. This won’t define our group, this group was incredibly resilient, showed up every day. I just don’t get it."

Despite losing to Wisconsin 5-3 on Saturday in the WCHA Final Faceoff, Frost and the Gophers were confident they’d still be in the NCAA Tournament. They had beaten UMD twice, Ohio State twice and their eight losses were against the top three teams in the country.

The Gophers spent time as the No. 1 team in the country this season, and never dropped lower than No. 4. But when UMD showed up as the No. 5 seed, Frost knew they were in trouble.

"There’s no shying away from the fact that we had eight losses, eight losses to the No. 1, 2 and 3 team in the whole country. No bad losses, 2-0 against another team in the field, 13 games against those teams," Frost said. "The Colgate coach texted me before the brackets came out and said we’ll see you next week. That’s where we were anticipating we would be."

Instead, Frost and his team met after realizing their season was over without an NCAA Tournament for a second straight year. Last year’s tournament was canceled due to the COVID-19 pandemic. It’s tough pill to swallow for a program that’s been to six Frozen Four’s under Frost, won four national titles and four WCHA Frozen Faceoffs.

"There was a lot of shock, first and foremost, when a couple teams came up and we didn’t. A lot of tears and frustration," Frost said.