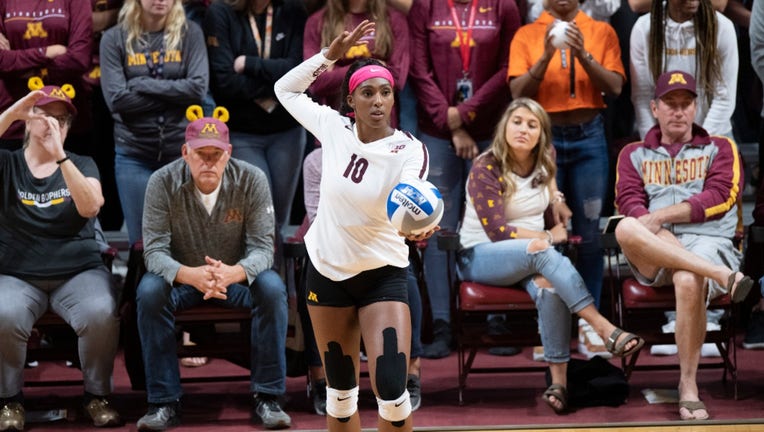 Stephanie Samedy recorded her 1,000th career kill earlier this month for the Gophers in a 3-1 win at Rutgers. ((credit: University of Minnesota))

MINNEAPOLIS - The University of Minnesota volleyball team has released its TV schedule for the 2021 season, and you can watch at least three matches on Fox 9+.

Hugh McCutcheon has loaded the Gophers’ early non-conference schedule with some of the toughest teams in the country to get Minnesota ready for the gauntlet of the Big Ten season. The Gophers, ranked No. 9 in preseason polls, open the 2021 season against No. 13 Baylor on Aug. 27 in Wisconsin as part of the Big Ten/Big 12 Challenge.

The Gophers open September, and welcome fans back to Maturi Pavilion, with a match against No. 2-ranked Texas. Four days later, they’ll head to Gainesville to take on No. 5-ranked Florida. They also face No. 14-ranked Oregon on Sept. 11 as part of the Big Ten/Pac-12 Challenge. Four of Minnesota’s first six matches of the season are against top-15 teams.

The Gophers will have three matches this season aired on Fox 9+. They host St. Thomas, in its first year in Division I, at 7:30 p.m. on Sept. 16 in the first game of the Diet Coke Classic. You can also watch the Gophers on Fox 9+ on Saturday, Sept. 18, as they host Iowa State.

The Gophers finished 16-3 last season, including 15-2 in Big Ten play and had their season end in a loss to Pittsburgh in the second round of the NCAA Tournament.