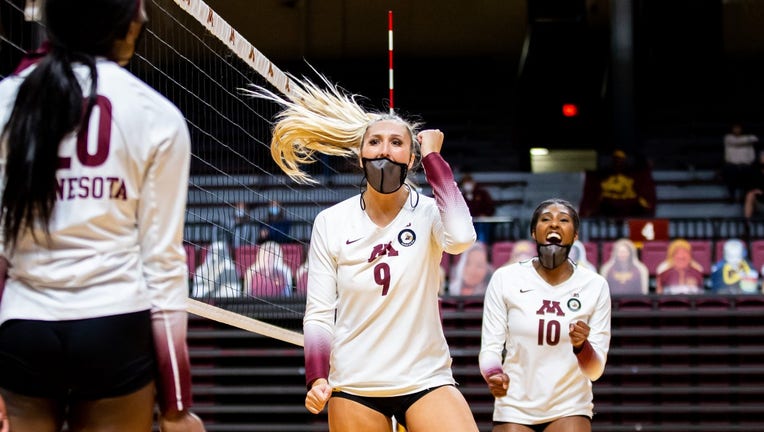 MINNEAPOLIS - The University of Minnesota volleyball team announced Thursday that its Friday night match against Rutgers at Maturi Pavilion has been canceled due to non-COVID-19 related illnesses with the Scarlet Knights.

Team officials said the decision was based on guidance from the Rutgers medical staff. The Gophers will win the game by forfeit, and improve to 13-4 in Big Ten play as Wisconsin comes to Minneapolis on Sunday. The Gophers will host Senior Day against the No. 5-ranked Badgers in the final regular season home match for four seniors – Bayley McMenimen, Airi Miyabe, Katie Myers and Stephanie Samedy.

Sunday's match will be played in front of a sellout crowd at Maturi Pavilion. Minnesota will enter the game after having a six match win streak snapped after a 3-1 loss to No. 9-ranked Purdue last Sunday.

Fans who had tickets to Friday night’s match are encouraged to use them at one of the following weekend events:

Fans should bring their tickets to be scanned, and ushers will direct fans to designated seating areas at Williams Arena, 3M at Mariucci Arena, Ridder Arena or Maturi Pavilion for Saturday's wrestling match.

Counting the forfeit win over Rutgers, the Gophers' volleyball team is 18-7 on the season and 13-4 in Big Ten play, a half game behind Wisconsin and Nebraska for the Big Ten lead. The Gophers also have matches at Penn State and at Maryland to close out the regular season before getting ready for the NCAA Tournament. It'll be a packed house on Sunday against a rival, with Big Ten title implications on the line for both teams.

"Sounds pretty good. We’ll see what happens and go from there. It’s nice that there’s something on the line, and it’s nice that there will be a lot of fans there regardless just to send off our seniors the right way," McCutcheon said.