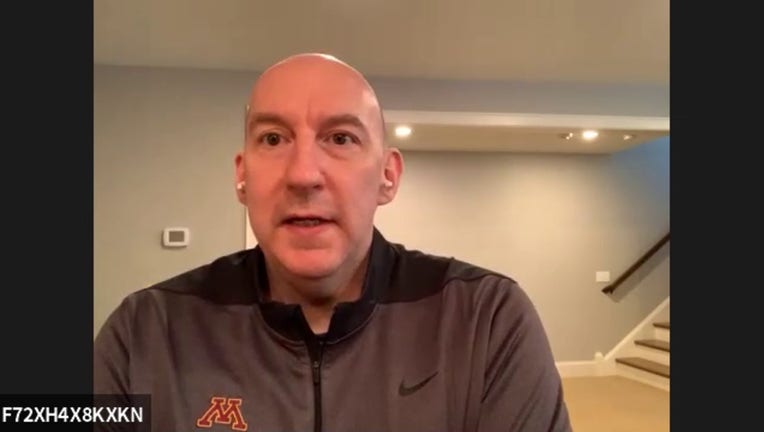 Minnesota volleyball coach Hugh McCutcheon spoke Sunday night about the Gophers receiving the No. 3 overall seed and a first round bye for the NCAA Tournament.

MINNEAPOLIS - The University of Minnesota volleyball team now knows its path to competing for a national championship.

The Gophers earned the No. 3 overall seed, and with it a first-round bye, for the NCAA Tournament. The bids for the 48-team tournament, shortened from 64 teams due to the COVID-19 pandemic, were announced in a selection show Sunday night. Minnesota is in the tournament for the sixth straight year, and eighth time under Hugh McCutcheon.

This season, it’s under remarkably different circumstances as the Gophers (15-2) have been a top-five team most of the season despite dealing with injuries and COVID-19 issues. At one point, Minnesota had four straight matches and five of seven canceled due to COVID-19 protocols.

"I’m extremely proud of the team. The ability, week and week out, to step out on the court and compete is something that I think we probably took for granted a year and a half ago," Gophers coach Hugh McCutcheon said Sunday night. "It feels pretty special to have come through a really rigorous season, having played quite a robust schedule, certainly as tough as anyone I think in our conference. Be rewarded with a high seed, we’re looking forward to the next phase of the season."

This year’s NCAA Tournament will be played exclusively in Omaha, Neb., at the CHI Health Center Arena and Convention Center. Minnesota is one of six Big Ten teams in the tournament, and all league teams received first round byes.

The Gophers have to wait until April 15 to play. They’ll face the winner of Georgia Tech/Lipscomb from the night before. On the other side of their four-team hub, LIU faces Pittsburgh, with the winner advancing to face No. 14 Utah.

Minnesota will have to find ways to stay sharp, with 10 days before its next match.

"It’ll give us a chance to hit our stride hopefully by the time we get to Omaha. At the end of the day, we’ll put these hours to goose use, I’m sure of that," McCutcheon said.

The Gophers last played in the NCAA Tournament in 2019, getting to the national championship match before falling to Stanford. They enter this year’s tournament on a four-match win streak, having lost just one set in the process.

As they have all season, McCutcheon said the team will take a day-by-day approach to the NCAA Tournament. That’s how the sports world is during the COVID-18 pandemic, and they’ll be focused on themselves. With their future opponent playing the night before, there’s not a lot of pre-scouting they can do before hitting the court.

"I think in this tournament, you really need to take care of yourself. We’ll be absolutely focusing on Minnesota volleyball," McCutcheon said.