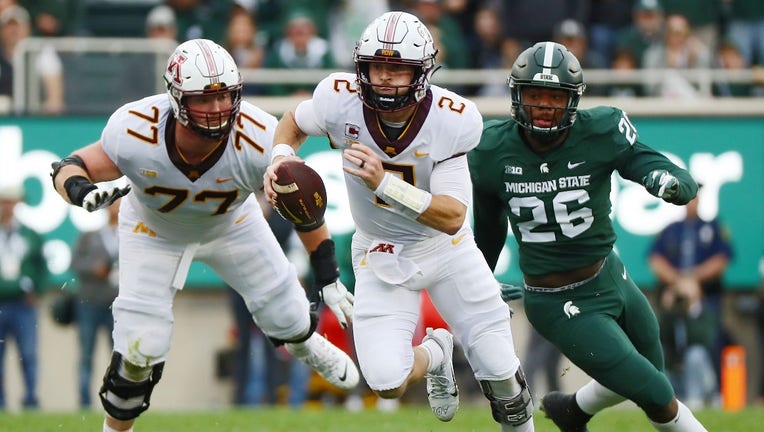 Tanner Morgan #2 of the Minnesota Golden Gophers runs for a first down in the first half of a game against Michigan State at Spartan Stadium on September 24, 2022 in East Lansing, Michigan.  ((Photo by Mike Mulholland/Getty Images))

MINNEAPOLIS - University of Minnesota quarterback Tanner Morgan was named the Big Ten’s Offensive Player of the Week on Monday after helping lead the Gophers to a 34-7 win at Michigan State to open Big Ten play.

Morgan was 23-of-26 passing for 268 yards and three touchdowns in the win. Two of those touchdowns went to Daniel Jackson, and the other went to Nick Kallerup. It was Morgan’s first game this season without top receiver Chris Autman-Bell, who is out the rest of the season after having surgery on a right leg injury suffered against Colorado.

Gopher Coach PJ Fleck provides an update after the team's weekend win over Michigan State and the team being ranked in the top-25 for the first time in nearly two years.

Morgan completed passes to 10 different receivers on Saturday as the Gophers put up more than 500 yards of total offense for the third straight game. It’s the fourth time in his career that Morgan has completed more than 83 percent of his passes in a game. In four games, Morgan is completing 77 percent of his passes and has seven touchdowns, with just one interception.

"He constantly wants to get better. He constantly wants to make everyone else around him better. That’s what’s going to make him an amazing husband, an amazing father, an amazing dad, an amazing coach, an amazing player and a person that you want in your life, because he’s going to constantly make himself better, which inevitably is going to make you better and bring the best out in you, and that’s what Tanner does really well, and I think sometimes we take that for granted," Gophers coach PJ Fleck said Monday. "We see him as the person he is, and I just keep seeing that getting better and better, and he’s just super competitive, which is what you want in a leader."

Through four games, the Gophers feature the No. 3 total offense in the country, at 543 yards per game. They’re behind only Ohio State and Tennessee.

Morgan is now 31-12 as Minnesota’s starting quarterback. The Gophers entered the national rankings for the first time in nearly two years on Sunday, being put No. 21 in the Associated Press Top 25 poll and No. 23 in the USA Today Coaches Poll.

The Gophers are 4-0 and host Purdue at 11 a.m. Saturday for Homecoming at Huntington Bank Stadium.