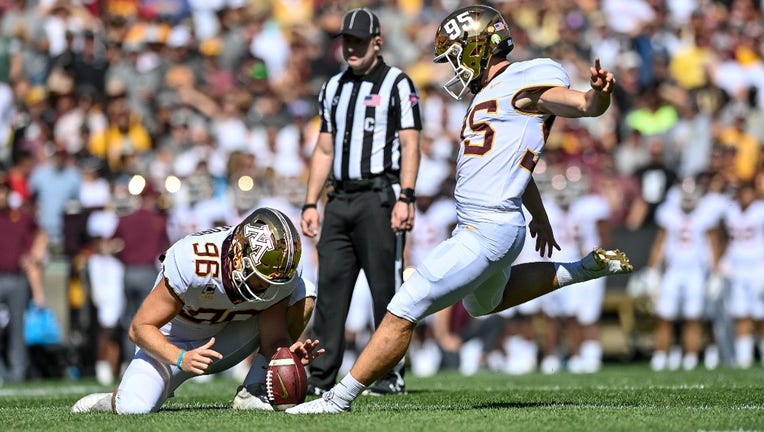 Place kicker Matthew Trickett #95 of the Minnesota Golden Gophers attempts a field goal as punter Mark Crawford #96 holds the ball in the first quarter of a game at Folsom Field on September 18, 2021 in Boulder, Colorado.  ((Photo by Dustin Bradford/Getty Images))

MINNEAPOLIS - The University of Minnesota football team survived sloppy and wet conditions in a 20-13 win at Purdue on Saturday, and the Gophers’ special teams stood out in the victory.

Minnesota punter Mark Crawford on Monday was named the Big Ten’s Co-Special Teams player of the week. It’s the Gophers’ first league honor on special teams since Casey O’Brien got it in October of 2019.

Crawford had six punts on the day for 308 yards, averaging 51.3 per kick. He also flipped the field position battle with four of the six punts inside the Purdue 15-yard line. The Boilermakers started offensive drives from their own 2, 9 and 15-yard line twice. He had three punts of 50-plus yards, and had four successful holds on two Matthew Trickett extra points, and two field goals in miserable conditions.

The Gophers and Purdue played in a downpour most of the afternoon, which was at its heaviest during Trickett’s last field goal that gave Minnesota a 20-13 lead in the fourth quarter.

Minnesota (3-2) is on a bye this week. The Gophers host Nebraska on Oct. 16 at Huntington Bank Stadium, and it was announced on Monday the game will be played at 11 a.m.