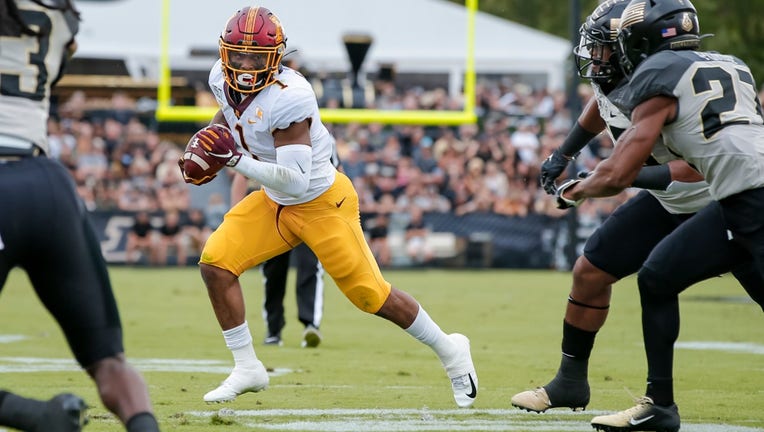 Rodney Smith #1 of the Minnesota Golden Gophers runs the ball during the game against the Purdue Boilermakers at Ross-Ade Stadium on September 28, 2019 in West Lafayette, Indiana. ((Photo by Michael Hickey/Getty Images))

MINNEAPOLIS - PJ Fleck joked earlier this week that it’s happened every year in his seven seasons as a Division I head football coach.

It’s Homecoming week for Minnesota, and at least one of his freshman football players came into his office to ask, “When is the dance?”

“I said ‘Are you serious?’ I’m not going to tell you who it is, I don’t want to embarrass him,” Fleck said. “Happens every year.”

Jokes aside, it’s an eventful week for the Gophers with several alumni and former players expected to be at Saturday afternoon’s game against Illinois at TCF Bank Stadium. Ben Utecht was at Fleck’s weekly radio show on Tuesday. It helps that the Gophers are 4-0 and won their Big Ten opener for the first time since 2014.

“The nieces and nephews are old enough to come out and see the game. All the home games are special now. The hardest part is getting the tickets,” Barber said.

It’s another opportunity for a home win, and a chance to start 5-0. Fleck stuck to his clichés earlier this week, saying each week is its own championship week. Their goal when the clock expires in the fourth quarter on Saturday is to finish the week 1-0.

“It’s good to come into this game 0-0, and we continue to think that way. We want to be better today than we were yesterday. That’s all we’re going to continue to focus on,” Fleck said.

It’s also hard to ignore where Fleck and the Gophers have gone since playing Illinois last season. The Gophers lost 55-31. They gave up nearly 650 total yards, and 430 of those came on the ground. It was part of a 1-5 start to the Big Ten season, and ultimately the end of Robb Smith as the team’s defensive coordinator.

Fleck and the players insist that this year is “completely different” for both teams. But when asked about it earlier this week, Barber struggled to find the right words to describe the loss. He didn’t want to or like talking about. He also acknowledged something had to change, and that something was Joe Rossi simplifying the defense.

The results were limiting Purdue to 10 points, Wisconsin to 15 and Georgia Tech to 10 in three of the Gophers’ last four games.

“It had to be the line in the sand. Stuff like that happens all around college football, it’s something you don’t like to see,” Barber said of Smith’s dismissal. “But like Rossi always says, there’s nothing that we changed. We’re still in the same defense, it was just our details went way up and just how we practice.”

Minnesota’s defense is tasked with slowing down an Illinios offense that has scored at least 30 points in four straight games. The Illini were on a bye last week, but are coming off a 42-38 loss to Nebraska.

Quarterback Brandon Peters is one of five transfer starters for Illinois this season. He has 765 passing yards and 10 touchdowns through four games. But the Illinois offense goes through running back Reggie Corbin. In three games this season, Corbin has 314 yards, three touchdowns and is averaging more than seven yards per carry. He recorded 2,000 rushing yards for his career in the loss to Nebraska.

Gophers quarterback Tanner Morgan is looking to build off the best statistical game of his career in a 38-31 win at Purdue last week. He was 21-of-22 passing for 386 yards and four touchdowns to three different receivers – Rashod Bateman, Chris Autman-Bell and Tyler Johnson. His 95.5 completion percentage is the highest in the history of the Big Ten with at least 13 passes attempted. His lone incompletion was a throw away after a blown protection.

He was named the Big Ten Co-Offensive Player of the Week on Monday. He’s just focused on getting better, and calls each game a “championship season.” He doesn’t really think about the fact that it’s Homecoming.

It can’t be forgotten that the next three opponents after Illinois – Nebraska, Rutgers and Maryland – are a combined 1-4 in Big Ten play and a combined 6-7 overall. The path is there for the Gophers to be 8-0 when Penn State visits TCF Bank Stadium on Nov. 9.

What matters right now is beating Illinois, and being 1-0 Saturday night.

“We’ve got to be better today than we were yesterday,” Fleck said.