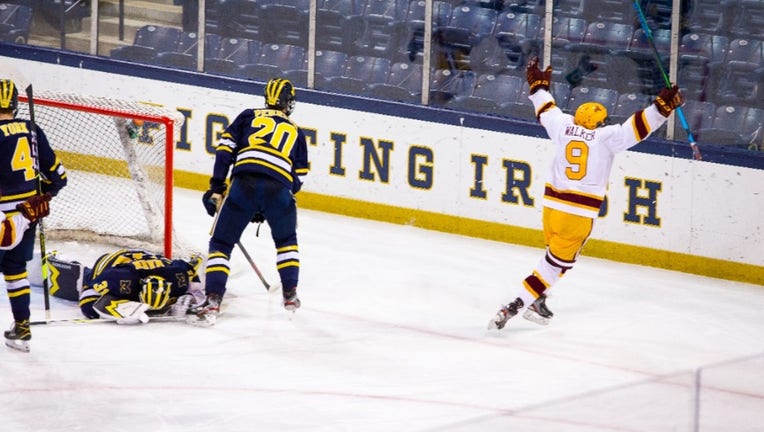 Sammy Walker celebrates after scoring in overtime to lead the Gophers to a 3-2 win over Michigan in the Big Ten Tournament semifinals Monday night at Notre Dame. ((credit: University of Minnesota Athletics))

MINNEAPOLIS - The University of Minnesota men’s hockey team locked up a bid to the NCAA Tournament with a 6-4 win over Wisconsin Tuesday night in the Big Ten Tournament title game at Notre Dame.

It’s the Gophers’ second Big Ten Tournament tile win, and first since 2015. Minnesota had to do it by winning three games in three nights. The Gophers beat Michigan State in overtime on Sunday, then Michigan in overtime on Monday before having to hold off a Badgers’ third period rally on Tuesday at Notre Dame.

"Couldn’t be more proud of our guys. Three games in three nights, they don’t do that in the National Hockey League and you rarely do it in college hockey. We couldn’t have played any better the entire weekend. We came in here and earned that championship," Gophers coach Bob Motzko said after the win.

It didn’t come without some tense moments for the Gophers. Minnesota led 5-1 after two periods before the Badgers stormed back with three third period goals to cut the deficit to 5-4. Roman Ahcan scored off his own rebound at the 5:34 mark of the third period, forcing Bob Motzko to use a timeout.

It got even more tense after Wisconsin star Cole Caulfield scored with 2:11 to play to cut Minnesota’s lead to 5-4.

"I’ve lived in those games before. You keep looking at the clock and it doesn’t move very fast. We just kept saying play our game. We had to just let our guys play," Motzko said.

Blake McLaughlin sealed the win with 24 seconds to play, winning a chase to a loose puck and scoring an empty net goal for a 6-4 lead. It was McLaughlin’s second goal of the night, and he added two assists in the win. He led the Gophers with four points on the night, a win where 10 players recorded points and six had multi-point games.

"I don’t think you ever expect to have a game like that. I think the puck kind of found me," McLaughlin said.

McLaughlin scored at 10:32 of the first period to give the Gophers an early 1-0 lead. Mike Koster scored less than two minutes into the second period before Minnesota went on a scoring barrage. Leading 2-1, the Gophers got three goals in under three minutes, from Brannon McManus, Scott Reedy and Jaxon Nelson for a commanding 5-1 lead.

Jack LaFontaine, the Big Ten Goaltender of the Year and a finalist for the Mike Richter Award, made 46 saves on 50 Wisconsin shots on goal. He was named the Most Outstanding Player of the Big Ten Tournament.

"This is my first time truly winning anything. We take a lot of pride in the fact that this program belongs back at the top. At the end of the day, we’re trying to set a culture for years to come. This accomplishment does that," LaFontaine said.

For five seniors who may or may not come back next season, it was reason to celebrate after up-and-down times with the Minnesota program before Motzko’s arrival. They soaked in a championship with the trophy both on the ice and in the locker room after.

The Gophers will make their first NCAA appearance since 2017, and they haven’t been to a Frozen Four since losing the national title game in 2014.

"Those seniors, it was a really neat look on their face. There’s a whole lot of banners at Mariucci Arena that were put up long before we were there. Those seniors now get to join, knowing that they’ve done something. And we said we’re not done," Motzko said.

The Badgers made their rally, but the Gophers finished with the Big Ten championship after Wisconsin won the regular season title. Minnesota will receive the Big Ten’s automatic bid to the NCAA Tournament. Wisconsin will receive an at-large bid when the field is announced later this week.

But is it enough for Minnesota to earn a No. 1 seed?