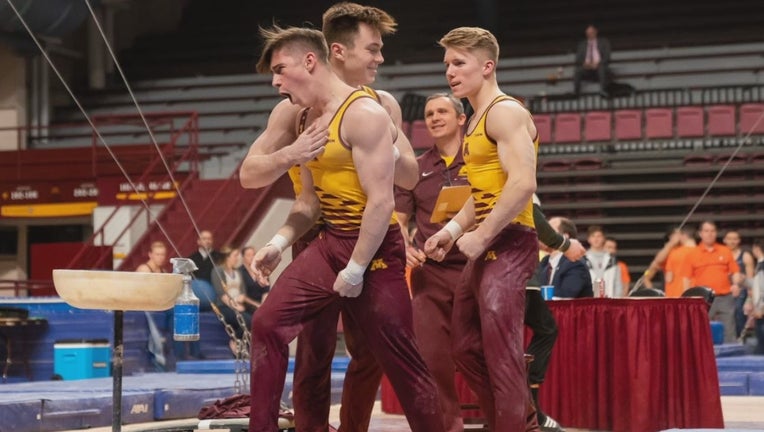 The Gopher men's gymnastics team celebrates during a meet. (University of Minnesota)

MINNEAPOLIS (FOX 9) - After fighting for their future for months, there’s now a feeling of finality for Gophers men’s gymnastics entering the final meet before being cut at the University of Minnesota.

But the Gophers program gets a chance to stick the landing on a 100-plus year history by hosting the NCAA Championships at Maturi Pavilion.

After fighting for their future for months, there’s now a feeling of finality for Gophers men’s gymnastics entering the final meet before being cut at the University of Minnesota.

This weekend also marks the end of a run for a Gopher great as Shane Wiskus competes for the last time in college.

"It’s excitement, anticipation and motivation all kind of wrapped up into one sentence," Wiskus said.

The Spring Park, Minnesota native put his Olympic training on hold in Colorado to come back to help his team make a late season push.

"I could’ve stayed out there and trained like normal, but I just felt pulled back," Wiskus said. "I felt a huge sense of responsibility to come back and finish with everyone."

"It just speaks volumes about his commitment and his maturity," Burns said of Wiskus’ decision to return. "He just has a desire for excellence."

The Gophers’ 2021 team captain also has unfinished business. Wiskus finished as the NCAA all-around runner-up in back-to-back years in 2018 and 2019. The Gophers senior is hoping he can now take it all on his home floor.

"I just want to go out and have fun," Wiskus said. "I want to be with my team and represent my school again, and hopefully get some hardware along the way."

Standing on the podium is an obvious objective this weekend, but making a historic program proud is the main goal in search of a title.

"I don’t know if you could write a good enough script, but I think we’ll take it one day at a time," Burns said.

"Obviously, I know what I want. Would it be great (to make a run)? Absolutely. It would be a great way to put the icing on the cake," Burns added.

The first round of the NCAA Championships begin Friday at Maturi Pavilion with the final round set for Saturday.