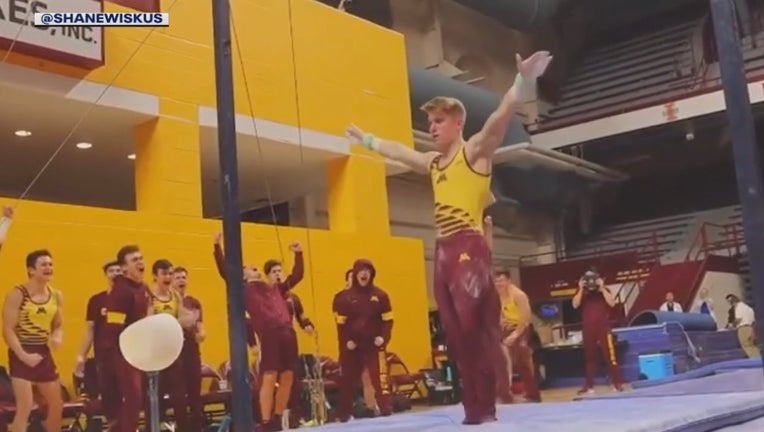 MINNEAPOLIS (FOX 9) - Gophers gymnast and Team USA member Shane Wiskus is now facing dual disappointment this season as, months after learning the Olympics would be postponed, the University of Minnesota is now planning to cut his team.

"You just got to keep it rolling from here and put it out of your head," opined Wiskus.

Gophers gymnast and Team USA member Shane Wiskus is now facing dual disappointment this season as, months after learning the Olympics would postponed, the University of Minnesota is now planning to cut his team.

The Gophers' men gymnastics, men's tennis, men's track and field teams are also facing cuts as the university struggles with deep losses due as of the result of COVID-19 changes.

"My first thought is the next generation and even the guys on my team that are behind me, I was thinking a lot about them," explained Wiskus. "And the missed opportunity that they won't have that I had going through these programs."

The university announced the potential cuts this week as they said the school faces a projected $75 million revenue loss due to the postponement of fall sports.

"I will support the resolutions and actions," said Thomas Anderson with the University of Minnesota Board of Regents. "I will tell you that there’s no joy in this, but it’s a stark reality of what has hit home."

Friday, the Board of Regents discussed but did not vote on the issue. Instead, the board will revisit the item at their next meeting in October.

"No AD wants to do this," said Gophers Athletic Director Mark Coyle. "There’s not one who wants to do this. I feel like we’ve exhausted every possible avenue and these are the difficult decisions we have to make."

While being a Gopher gymnast is a bit up in the air right now, the team is still tight, relying on each other and hitting the gym. But even so, Wiskus hopes the elimination of men's gymnastics at the university isn't really the beginning of the end.

There are 58 impacted student-athletes across the affected teams. Scholarships for those students who choose to remain at the University of Minnesota will be honor.