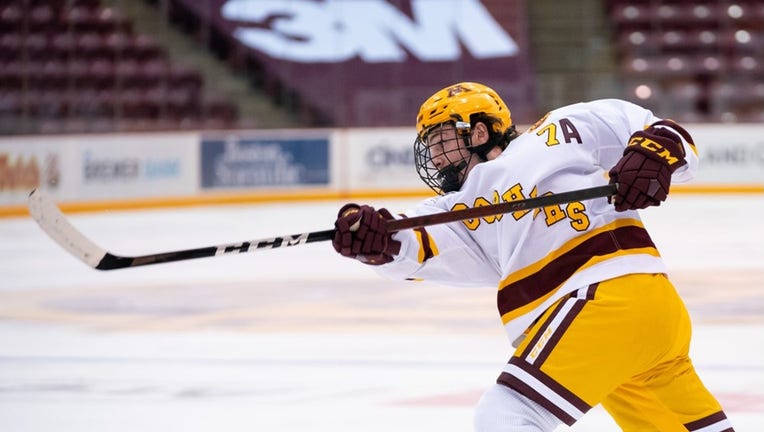 MINNEAPOLIS - The message was pretty clear for the University of Minnesota men’s hockey team as it returned to practice on Monday after getting swept by Notre Dame last weekend: It’s time to get back to business.

The Gophers were the hottest team in college hockey, No. 1 in the nation after a 10-0 start. They’ve since lost three of their last four games after getting swept by Notre Dame on their home ice last weekend. Coach Bob Motzko took the blame for the 3-2 and 2-1 losses, and it was enough that the Gophers had a "Battle Practice" on Monday, a day typically reserved for skill work.

Instead, they worked through 1-on-1s, 2-on-2s and battles for loose pucks. Motzko said he felt his team wasn’t ready to put in the work it took to beat the Fighting Irish last weekend, and that can’t happen again.

"Well it sure was an issue for us last weekend," Motzko said Tuesday in his weekly media session. "We just needed to be better prepared last weekend and we weren’t. We’re going to not make that mistake again."

The Gophers knew they wouldn’t go undefeated, sports just simply doesn’t work like that. But after a weekend sweep and falling out of the No. 1 spot in the national polls for the first time in five weeks, they’ve learned they can’t just show up and win with their skill only. Minnesota fell three spots to No 4 in the USCHO weekly poll, receiving three first-place votes.

"The lesson learned as that we’ve got to be ready to battle every night. No matter who we play, we’ve just got to be ready to show up and find ways to win," said forward Sampo Ranta, who is third on the Gophers with 10 points in 11 games and has a team-high seven goals."

Minnesota has turned the page, and now they get ready for another home series with Arizona State, one of the more powerful offensive teams in college hockey. The Gophers hosted the Sun Devils earlier this month and earned a sweep with 4-1 and 6-4 victories.

Two weeks ago, they put up 10 goals on the Fighting Irish, which just swept the Gophers. But Arizona State has lost five of its last six games, and was swept at Wisconsin last weekend.

Motzko’s message to the team has been consistent since their 10-0 start, and subsequent skid: Take it one day at a time, and focus on the task ahead.

"Of course when you start off like we did, there’s high emotions and we tried to guard against getting too up on that, now you lose three out of the last four games,’ Motzko said. "The truth always lies in the middle, and I want a little bit more business approach to how we’re doing things right now."

Brannon McManus, who has one goal and six assists in seven games, said it’s a good thing for them to face adversity now rather than in March. The results the last two series have gotten the attention of the players.

"When you get swept, it’s motivation. You can’t show up to play and expect to win and rely on skill. You’ve got to play a certain way, and it’s a lesson as a team that we all have to learn," McManus said.