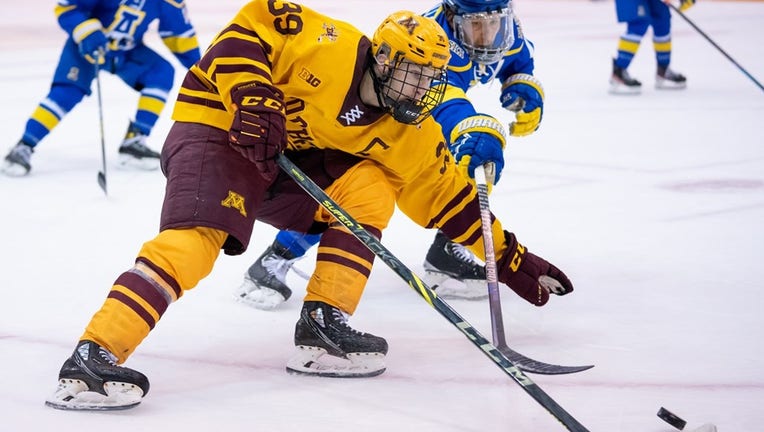 Ben Meyers leads the Gophers men's hockey team in scoring and will join Brock Faber and Matthew Knies on the U.S. Olympic team at the Winter Olympics in Beijing. ((credit: University of Minnesota Athletics))

MINNEAPOLIS - The University of Minnesota men’s hockey team is headed to the east coast for the NCAA Tournament.

The Gophers received an at-large bid after falling to Michigan 4-3 in the Big Ten Tournament title game Saturday night at 3M at Mariucci Arena. Minnesota got the No. 2 seed in a region that includes Western Michigan, UMass and Northeastern.

The Gophers will face UMass at the DCU Center in Worcester, Mass., at 5 p.m. Friday. Western Michigan and Northeastern square off earlier in the day, and the winners will meet at either 3 p.m. or 5:30 Sunday for a trip to the NCAA Frozen 4.

Minnesota will be making its 39th appearance in the NCAA Tournament.

"It never gets old – this is a great time of year. They call it "March Madness" for a reason," Gophers’ coach Bob Motzko said Sunday night. "We’re a good road team, and we need to get on the road right now. We’ve been at home for too long. We’re going to be a fired-up group to get out of here."

The Gophers got down 4-1 to Michigan on Saturday in the Big Ten title game, then rallied with a pair Matthew Knies power-play goals in the third period before coming up short. The Gophers are led by Big Ten Player of the Year Ben Meyeres, Defensive Player of the Year Brock Faber and Motzko, the Coach of the Year for the second time in three seasons.

The Gophers are 24-12 on the season, and 11-5 on the road. Minnesota enters the tournament having made the Frozen Four 21 times and with five national championships. The Gophers haven’t won a national title since 2003, and haven’t been to the Frozen Four since 2014.

Minnesota has not faced UMass in the NCAA Tournament, but the Gophers are 4-0-0 against the Minutemen all-time.