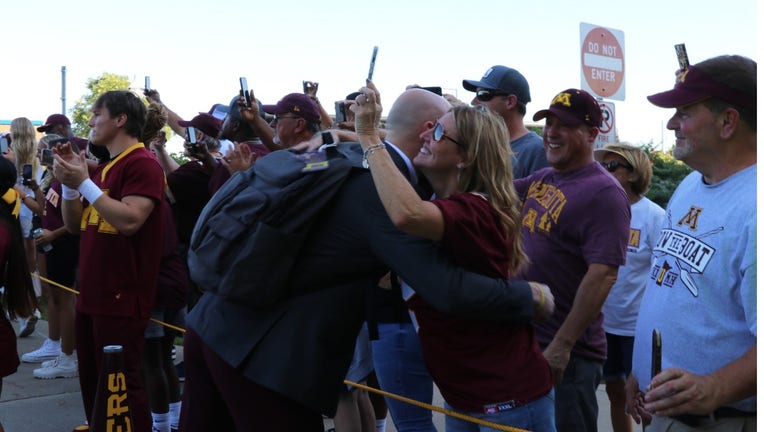 One of the signature moments of a Gophers football game day is the team's march into Huntington Bank Stadium 2-and-a-half hours before kickoff. (credit: University of Minnesota Athletics)

MINNEAPOLIS - There is truly nothing like game day on a college football Saturday, or whatever day kickoff is.

For fans, it’s a day of tailgating, wearing your favorite players’ jersey and being on campus with the hopes of celebrating a victory. For the players, a week of film study, practice and meetings leads up to what they hope is executing a game plan where the end result is a win. But what’s the game day experience for the players like leading up to kickoff? We asked Tanner Morgan, Tyler Nubin and Michael Brown-Stephens.

Gophers football: What's the game day experience for players like?

Gophers quarterback Tanner Morgan talks about what it's like for players to go through game day activities leading up to kickoff.

Every college football coach is about scheduling and details, and PJ Fleck is no different. Pregame festivities are planned from the moment players wake up on game day, to the second they run out of the tunnel. There’s a team meeting the night before, a team meal on game day that typically involves a motivational speaker. After eating, the team watches the hype video for that game, put together by the Gophers’ digital media staff.

Then, it’s time to get on buses and head to Huntington Bank Stadium. The Gophers arrive to their stadium entrance 2-and-a-half hours before kickoff, with the Minnesota marching band, their families and fans waiting for them. The team is wearing full suits, some have headphones on to focus and the rouser is playing as they walk in. Many players find their families for a pregame hug. Fleck walks down to handshakes and a few selfies with kids, and it’s time to lock in.

Captains and team leaders meet at midfield, and then it’s time to head into get ready for warm-ups. For players, it doesn’t matter who the opponent is, they find their own ways to get mentally and physically ready.

"I like to be a little more loose up until the upcoming hours before the game. When we have an early game, you would get up and go straight to it," Brown-Stephens said. "In the stadium, it’s just more locked in and focused. I’ve got a lot of emotions going through my mind, just anxiety builds up and game time it’s just like everything goes away. Just like we’re here, let’s do it."

"It’s awesome, man. Guys are locked in and ready to go on game day. Really it’s just getting yourself ready to go, ready to play. Whatever gets you ready to play, let it bleed out of you," Nubin said. "Everybody has their specific reasons for why they play this game, that’s what we try to do is focus on that."

"That’s one of my favorite parts of game day. Seeing my parents, they make the trip to almost every single game, so that’s awesome," Nubin said.

Morgan said he uses pregame and game day to reflect on his football journey, and get closer to God.

"Just get that emotion, fire going to when you step off the bus, it’s go time. You get to the stadium, everybody has their different routines and that’s what’s cool about football. That’s the cool part is everybody knows what clicks for them and what they have to do to be at their best," Morgan said. "For me, being emotionally ready to play a football game, a huge part of that is spending time with God that day, the night before and understanding how blessed I am to be in this situation to even play football. That really grounds me, and that’s a huge part of my emotional fire being lit. What’s cool is it’s different for everybody."

It’s just two games, but the Gophers are in rare territory on both sides of the football as they enter Saturday’s game against Colorado.

"We legitimately don’t think about that stuff, we’ve got a lot of stuff to improve on. When you look at our offensive line, we’ve had fantastic protection the first two weeks. That’s a huge part of it, making things a lot easier," Morgan said. "Complacency is the killer of success, so we’re not going to get complacent."

That’s led to two lopsided wins to start the season.

"I know this defense can be really good. I know the past few games have been really good games for us, we have a lot to build off those games," rush end Thomas Rush said. "We don’t necessarily focus on the result of those games, as much as the progress of those games and what went on. I think being in the room with the guys and the coaching staff we have is phenomenal, and I wouldn’t want to be anywhere else."

"Our standard is going to keep going up, we’re not going to sit back and be like we played great defense this week, we’re fine," Nubin said. "It’s a different opponent, every week is its own entity so we make it an emphasis to uphold our standard for the next week."