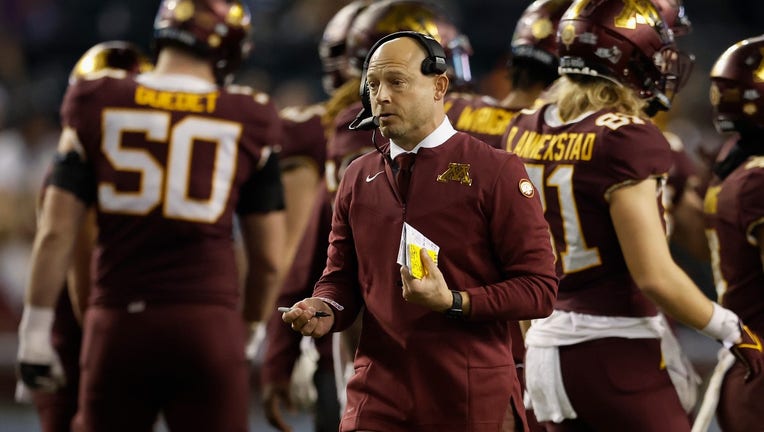 Head coach P. J. Fleck of the Minnesota Golden Gophers during the Guaranteed Rate Bowl against the West Virginia Mountaineers at Chase Field on December 28, 2021 in Phoenix, Arizona. The Golden Gophers defeated the 18-6.  ((Photo by Christian Petersen/Getty Images))

The Gophers will open the 2022 regular season under the lights at Huntington Bank Stadium against New Mexico State and former Minnesota coach Jerry Kill at 8 p.m. on Thursday, Sept. 1. Nine days later, the Gophers will host Western Illinois at 11 a.m. on Sept. 10.

The Gophers will round out the non-conference schedule hosting Colorado at 2:30 p.m. on Sept. 17. Minnesota will host Purdue for Homecoming at 11 a.m. on Oct. 1.

Minnesota also knows its start times for two Big Ten road games. The Gophers will face Illinois at 11 a.m. on Oct. 15. The following week, they’ll be under the lights in Happy Valley for a 6:30 p.m. kickoff and white out at Penn State.

The Gophers are coming off a 9-4 season that ended with a 23-13 win over rival Wisconsin for Paul Bunyan’s Axe, and an 18-6 win over West Virginia in the Guaranteed Rate Bowl. PJ Fleck is 35-23 in five seasons at Minnesota, and 3-0 in bowl games. The Gophers are also 21-21 in Big Ten play under Fleck.