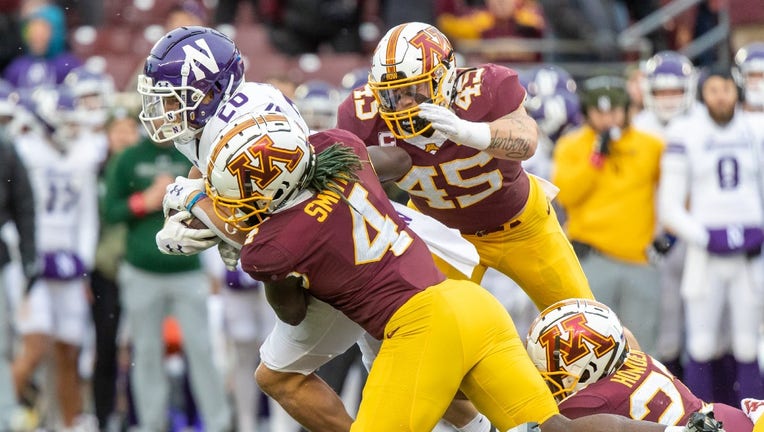 MINNEAPOLIS - The University of Minnesota football team hosts rival Iowa at 3 p.m. Saturday at Huntington Bank Stadium in the annual battle for Floyd of Rosedale, a game you can watch on Fox 9.

The Gophers are celebrating Senior Day, and as many as 23 players will step on the field for the final time. It’s a group that includes three of the "Encore 4" in Tanner Morgan, Mo Ibrahim and John Michael Schmitz as sixth year seniors. Morgan will leave Minnesota as the program’s career wins leader at quarterback. Ibrahim already has several school records, and will leave as one of the great Gopher running backs ever.

Schmitz is up for several national offensive line awards this year, but the goal remains the same as it does every year: Bring Floyd Home. It’s something the program hasn’t done under PJ Fleck, as the Gophers are 0-5 against the Hawkeyes. Minnesota has lost seven straight in the series, with the last win coming in 2014.

"We know how important this game is to our Minnesota fans and the State of Minnesota. We’re treating this as the 1-0 Iowa championship season. That’s how we’ve done it all season, that’s not going to change," Schmitz said.

Mariano Sori-Marin is the unquestioned leader of the defense, the signal-caller and the leading tackler at 49 stops. He’ll have his entire family at Saturday’s game for one last Ski-U-March, senior meeting at midfield and hopefully, his first win over Iowa.

To this point, he can only dream of what it would be like to celebrate with Floyd of Rosedale. The Illinois native now says he’s "Minnesota at heart."

Jordan Howden started his Gophers’ career as a walk-on, and nobody really knew who he was until he stepped in for an injured Antoine Winfield Jr. in a game at Maryland. He’s been a starter since the 2019 season, and was an All-Big Ten pick last year. This year, he’s fourth on the Gophers’ defense with 41 tackles, has two interceptions and four pass break-ups.

His most memorable moment thus far is a game-sealing interception against Penn State in 2019. His memories including walking to a night class as a freshman in 40-below zero wind chills, and going from a walk-on to a scholarship player.

"It’s something you don’t forget, I will never forget, it’s a story I’ll be able to tell my kids one day. I just look back on how far I came and to be here for five years, it’s been a blessing," Howden said.

With two more wins, the current senior class puts itself in a group that’s helped Fleck win at least nine games in three of the last four seasons. The Gophers will also get a chance to go 4-0 in bowl games under Fleck, and the Big Ten West race isn’t over yet.

"It’s special to see how far this program has come and to see where this program is going to go in the future," Schmitz said.

THE BALL IS THE PROGRAM

Simply put, the Gophers’ best chance for a victory over Iowa is to not give Iowa the ball.

"I don’t know if I’ve seen that in college football where the defense creates the majority of the points throughout the year. Year in, year out, their defense scores an awful lot, like an offense," Gophers coach PJ Fleck said. "They never beat themselves. They’re in the right place, right time, all the time."

JOE ROSSI UP FOR BROYLES AWARD

For the second straight year, Gophers’ defensive coordinator Joe Rossi is a nominee for the Broyles Award, which goes to the top assistant in college football. He leads a defense that’s No. 4 in the nation in scoring (13.1 points allowed per game), No. 8 in total defense (274 yards), No. 2 in third down conversions and No. 13 in rushing (113.8).

The Gophers have two shutout wins this year, and have won their past three games over Nebraska, Rutgers and Northwestern by a combined 82-16. They’ve allowed one touchdown in their last 12 quarters.

The Gophers are 33-14 overall with Rossi as defensive coordinator and 30-10 in the last four full seasons.

"Just to see Coach Rossi get the recognition he deserves is awesome. He’s a guy that doesn’t really care about that. He just puts his nose down and works each and every day," Sori-Marin said. "He’s one of the best coaches in the country, best coach I’ve ever had."