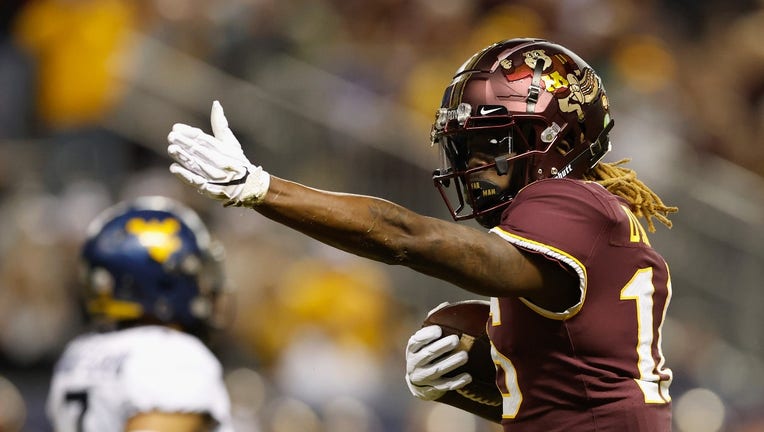 Wide receiver Dylan Wright #16 of the Minnesota Golden Gophers reacts after a first-down reception against the West Virginia Mountaineers during the first half of the Guaranteed Rate Bowl at Chase Field on December 28, 2021 in Phoenix, Arizona.  ((Photo by Christian Petersen/Getty Images))

MINNEAPOLIS - The University of Minnesota football team is less than a month away from fall camp.

The Gophers are coming off a 9-4 season in 2021, as PJ Fleck enters Year 6 in Minnesota. He’s 35-23 in five seasons, including 21-22 in Big Ten play, and 3-0 in bowl games. It’s the hope of the Gophers and their fans that 2022 starts with the momentum from where 2021 left off, with wins over rival Wisconsin and West Virginia in the Guaranteed Rate Bowl.

But we also must admit there was meat left on the bone. The Gophers were losses to Illinois and Iowa away from playing Michigan for a Big Ten title in Indianapolis. With Big Ten media days and fall camp coming soon, here are five offensive players to watch as we get closer to the Sept. 1 opener against Jerry Kill and New Mexico State.

Tanner Morgan, like his head coach, is entering year six with the Gophers. He’s back for his final year, looking to be more like the player that led Minnesota to an 11-2 season in 2019. He set all kinds of passing records that year, but hasn’t repeated that success in the two seasons since. In the COVID-19 impacted 2020 season, he had seven touchdowns and five interceptions in seven games. Last year, 10 touchdowns and nine interceptions in an offense dominated by the run game.

Kirk Ciarrocca is back, as are most of the Gophers’ top receivers. It’s Morgan’s year to lead the Minnesota offense to a Big Ten West title.

The Gophers will have a fresh look on the offensive line after losing four starters from 2021, but the one constant is John Michael Schmitz. Like his quarterback, Schmitz is back for his final season at center to anchor an offensive line that led the Gophers to the No. 3 rushing offense in the Big Ten last season. Running the ball will be a priority, but it’s also on the offensive line to give Morgan time to get the ball down field. He was named Preseason First Team All-Big Ten, and an All-American by Athlon Sports. He’s played in 44 career games and had 23 starts. The offensive line will go as far as Schmitz goes.

The St. Cloud native might be the most under-the-radar weapon for the Gophers’ offense heading into fall camp. At 6-7, 270 pounds, that’s hard to do. After just five catches combined in 2019 and 2020, Brevyn Spann-Ford broke out with a career-high 23 catches for 296 yards and one touchdown. It feels like he’s just scratching the surface at tight end, and he’s also made strides in run-blocking. If the Gophers can get another big year out of Spann-Ford, it makes Minnesota that much more difficult to defend.

A lot of eyes will be on Chris Autman-Bell to lead the receiving corps, but Dylan Wright may be the most athletically gifted player in that room. Wright played in 12 games last season after transferring from Texas A&M, missing one after the death of one of his best friends. He finished the season with 18 catches for 365 yards and two touchdowns. He had times where he was the best athlete on the field, and others where he disappeared. If he can find consistency in making plays, there’s no limit to how explosive the Gophers can be.

We can’t talk about the Minnesota offense without addressing the running back room. It’ll be led by Mo Ibrahim, who is coming off an Achilles injury in last year’s opener against Ohio State. The Gophers managed to have the No. 3 rushing offense in the Big Ten without Ibrahim, and losing Bryce Williams and Trey Potts to season-ending injuries. Ky Thomas and Mar’Keise Irving left the program, leaving run-game duties up to Ibrahim, Potts and Williams.

Potts had 552 yards and six touchdowns in five games before being hospitalized with an undisclosed injury at Purdue. Williams had 186 yards and three touchdowns in eight games before a season-ending leg injury at Northwester. Both looked healthy in spring football, and both should give the Gophers quality depth behind Ibrahim in the run game.