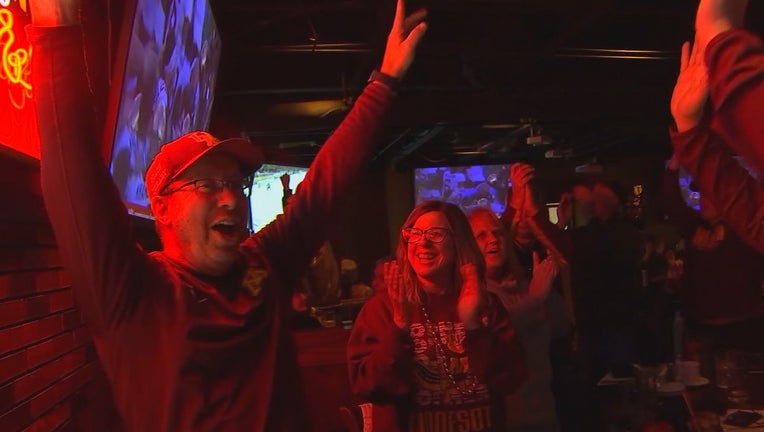 BLOOMINGTON, Minn. (FOX 9) - Fans are going wild after the Gophers' capped off a historic season with a bowl win in Tampa on New Year's Day.

The Gophers took down Auburn in that game, winning 31-24.

Fans are going wild after the Gophers' capped off a historic season with a bowl win in Tampa on New Year's Day. The Gophers took down Auburn in that game, winning 31-24.

The win marked the Gophers' 11th victory of the season and the most wins for a Gophers football squad in more than 100 years.

For fans, Wednesday's game was electrifying with Tyler Johnson and company firing on all cylinders. By the time the senior wide receiver reeled in an incredible touchdown catch at the end of the first half, a watch party at Senser’s exploded.

"This is awesome game," said fan Jim Dukart while the matchup was underway. "I love what's happening so far. Love the play calling. Love the spirit Minnesota is playing with."

"Well, I think no one picked them to win so that’s good in favor of Minnesota," opined Brian Hanover. "No one expecting them to do well. So I think they’re taking advantage of that and making some plays."

By all accounts, the Outback Bowl was painted maroon and gold Wednesday with a huge Minnesota turnout in the Florida sunshine that included Jennifer Burke.

"Fabulous trip, went to Beach Bash," she said. "Thank you very much for having us down here Tampa."

"I was actually talking to my dad about it this morning," said Senser's waitress Ness. "I was like, we should have flown and gotten tickets."

For those who didn’t make the trip south, like Ness, Senser’s provided an incredible atmosphere all the way through an intense fourth quarter.

It ended with the Gophers holding on for a stunning 31-24 victory over college football royalty, the SEC’s Auburn Tigers.

"It was a great season," said Gophers fan Rachel Sandquist. "We had a lot of fun. Eleven wins like for the first time since 1904, so pretty excited."

"They hung on, that was awesome," added Dukart. "It’s like a dream start to the season, I mean the year. Next year: Rose Bowl. Pasadena, baby, not settling for less."