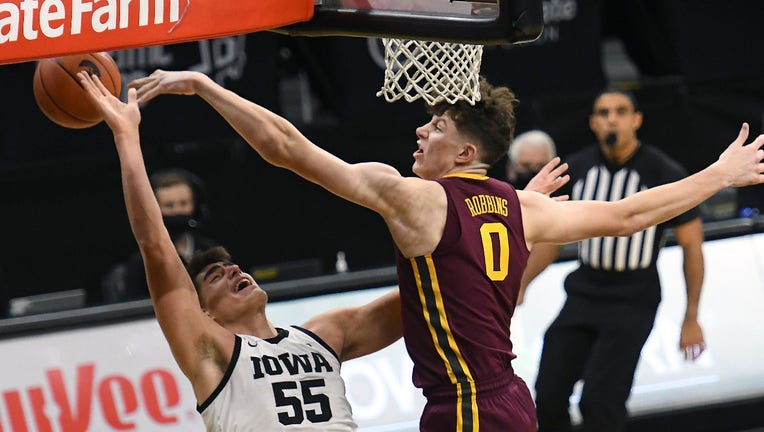 The Gophers entered the poll for the first time in three years two weeks ago, at No. 22. They jumped up to No. 16 after consecutive wins over Iowa and Michigan State. Minnesota then lost at Wisconsin,71-59, on New Year’s Eve and bounced back with a 77-60 win over Ohio State.

The Gophers dropped in the polls after losing at No. 10-ranked Michigan 82-57, and Sunday’s 86-71 loss at No. 5-ranked Iowa. Minnesota’s only game this week is a rematch with Michigan, now ranked No. 7 in the country, Saturday afternoon at Williams Arena. The Gophers are 10-0 at home this season, and 0-4 on the road. They're one of six Big Ten teams ranked in this week's poll.

Minnesota trailed just 39-37 at half against Iowa on Sunday, but the Gophers were out-scored 47-34 in the second half. The Gophers trailed by as many as 19 points before cutting it to 68-63 with 5:30 to play. But the Hawkeyes finished the game on an 18-8 run.

Both Gach and Marcus Carr led four Gophers in double figures with 12 points each. Luka Garza led Iowa with 33 points, and Joe Wieskamp added 20 points. Minnesota shot just 35 percent from the field in the loss, including 29 percent from the perimeter.

The Gophers had won three straight after losing their Big Ten opener at Illinois. Minnesota has now lost three of its past four games, and likely needs a win Saturday over the Wolverines to stay in next week’s rankings. Minnesota's first eight Big Ten games are all against ranked opponents. That stretch ends Saturday against Michigan.