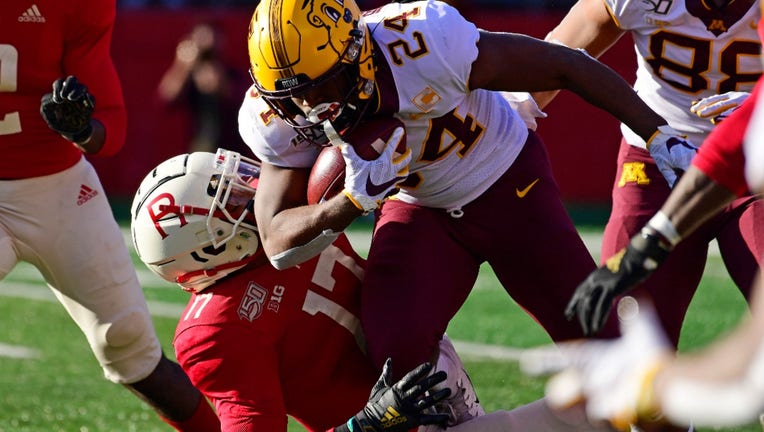 Mohamed Ibrahim #24 of the Minnesota Golden Gophers is tackled by Zamir Mickens #17 of the Rutgers Scarlet Knights during the second quarter at SHI Stadium on October 19, 2019 in Piscataway, New Jersey. ((Photo by Corey Perrine/Getty Images))

MINNEAPOLIS - It’s been 52 years since the University of Minnesota football team has won any kind of championship.

If you ask coach PJ Fleck, what matters is that they finished the “Rutgers season” 1-0. They’re also leading the division after undefeated Wisconsin was upset in a 24-23 loss at Illinois on Saturday.

The win came at a bit of a price as senior linebacker Kamal Martin left the game in the third quarter with a right knee injury. He spent several minutes in the injury tent on the sideline before being carted off the field. Fleck said after the game Martin was “walking around a little,” but didn’t have a further update. He’ll have an MRI when the Gophers get back to Minneapolis to determine the severity of the injury.

Martin, who was the Big Ten Defensive Player of the Week after 15 tackles in the win over Nebraska, would be a big loss for Minnesota’s defense if the injury is serious.

The Gophers’ offense took a little while to get going, but they eventually piled up their yards and put up 35 of Minnesota’s 42 points on Rutgers. Rodney Smith, who finished with 119 yards and two touchdowns, but the Gophers on the board early with a 3-yard touchdown run.

The Gophers’ defense intercepted Rutgers’ quarterback Johnathan Langan three times Saturday, including two from Antoine Winfield Jr. Phillip Howard picked him off in the second quarter, which set up the Gophers’ second touchdown after Minnesota turned it over on downs. A 13-play drive ended with Tanner Morgan hitting Rashod Bateman for a 13-yard touchdown on a corner route. Two plays before, Morgan missed an open Tyler Johnson in the end zone. Morgan also missed Bateman in the corner on the same throw before responding with a touchdown pass.

Minnesota opened the third quarter with a 10-play, 72-yard drive, capped by Smith’s 16-yard touchdown on a cutback, to take a 21-0 lead. Smith finished the night with 111 yards and two scores on 19 carries, averaging 5.8 yards per carry.

The moment of the game happened on the Gophers’ next offensive possession. They got the ball back after Rutgers missed a 47-yard field goal, and Mohamed Ibrahim scored from six yards out. Michael Lantz, as usual, came out for the extra point. His holder? Four-time cancer survivor Casey O’Brien. The hold was perfect, the kick was good and O’Brien was mobbed by his teammates. O’Brien and Fleck then shared a long embrace on the sidelines, and when Fleck had to get back to coaching, he was wiping away tears.

After 14 surgeries and months in the hospital batting cancer, It was O’Brien’s mission to play Division I football at some point. Mission accomplished.

And his night wasn’t done. Morgan hit Tyler Johnson for a 56-yard touchdown, and Winfield Jr. returned his second touchdown of the night 33 yards for a touchdown. O’Brien held the extra points for both, totaling three for the night.

Johnson finished the game with six catches for 130 yards and the touchdown. He recorded his 12th career 100-yard receiving game, passing both Eric Decker and Tutu Atwell on the all-time list. The touchdown catch was also the 26th of his career, putting him second all-time in program history behind Ron Johnson's 31 careet touchdowns.

Bateman finished with four catches for 72 yards and a score, including a highlight-reel 1-handed grab in the first half.

The Gophers bring their 7-0 record home to face Maryland (3-4), which lost 34-28 to Indiana Saturday. Minnesota’s win and Wisconsin’s loss puts the Gophers atop the Big Ten West with five games left.