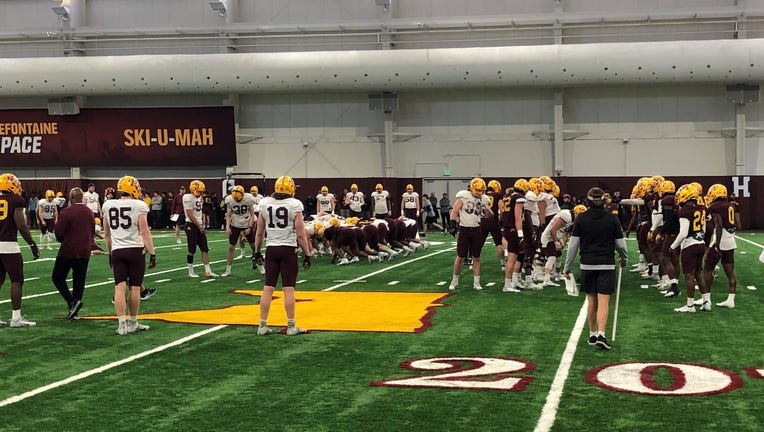 The University of Minnesota football team held its second spring practice open to the public on Saturday at Athletes Village.

MINNEAPOLIS - The University of Minnesota football team held its second practice of the spring season open to the public on Saturday, and fans at Athletes Village were treated to a day largely dominated by the defense.

The Gophers had a defensive unit last year that finished in the top-10 in the country in total yardage allowed and points allowed, and was third in the Big Ten in rushing defense. They’ll have a mix of returning veterans and new faces at every level for the 2022 season.

Here were a few defensive highlights from Saturday’s session:

Overall, a successful day for the defense while Chris Autman-Bell, Michael Brown-Stephens, Brevyn Spann-Ford and even Nick Kallerup all had their moments for the day on offense.

Linebacker Mariano Sori-Marin says the Gophers’ defense is now putting its work in the weight room during the winter to work on the field.

Autman-Bell has to go against it every day in practice.

The Gophers appear to be on the verge of major talent at every level of the defense. Trill Carter and Thomas Rush lead the defensive line. Sori-Marin and Oliver lead the linebackers, with Josh Aune and Cody Lindenberg each back healthy. Dixon is all over the field at several positions.

But the talk of spring practice is about the secondary. They have veterans back in Jordan Howden and Tyler Nubin at safety, and Terrell Smith at corner. Justin Walley had a standout freshman season at defensive back. The Gophers have brought in Stapp and Bishop at defensive back. It might be the deepest and most talented secondary Fleck has had.

Could it be the best in the nation?

"The expectation is that they’re going to be one of the best secondaries in the country, and they know that. You can see that in the way they work," Sori-Marin said.

The Gophers have a total of 14 spring practices before the April 30 Spring Game at Huntington Bank Stadium.