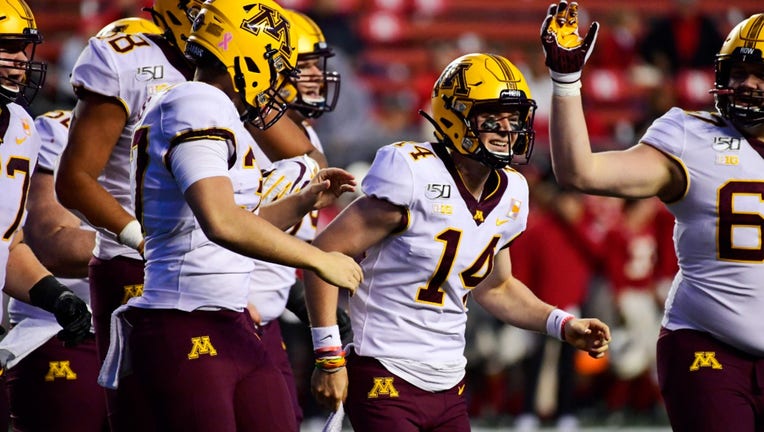 Casey O'Brien #14 of the Minnesota Golden Gophers, a four-time cancer survivor, is celebrated for holding on a point after touchdown during the fourth quarter at SHI Stadium on October 19, 2019 in Piscataway, New Jersey. Minnesota defeated Rutgers 42 ((Photo by Corey Perrine/Getty Images))

MINNEAPOLIS (FOX 9) - Casey O'Brien says he has finished chemo treatments after another bout of cancer.

In a tweet, O'Brien shared a photo of him celebrating with his doctors and nurses, all decked out in Gophers gear, after finishing up his final chemo treatment.

"LAST DAY OF CHEMO!" O'Brien wrote. "5x Survivor.....God has taken care of me again! Surrounded by all my HERO doctors and nurses. Thankful to be treated at the best hospital in the country @UMNChildrens. Can’t wait to go play football."

O'Brien had to undergo surgery in November after spots showed up on a scan but later assured fans that he would be fine.

The fifth battle came after an incredible season for O'Brien and the Gophers.

O'Brien got his first chance to play in a college football game for Minnesota, holding kicks as the Gophers thrashed Rutgers on the road. Making the moment even more special, cameras caught O'Brien hugging head coach P.J. Fleck after his first appearance.