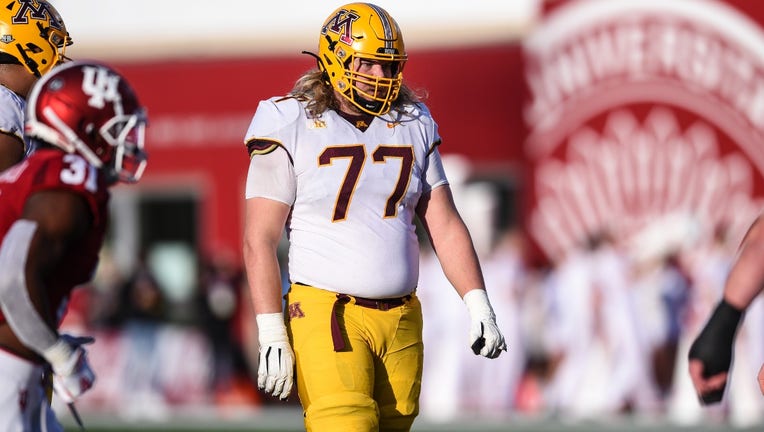 Minnesota OL Blaise Andries (77) during a college football game between the Minnesota Golden Gophers and Indiana Hoosiers on November 20, 2021 at Memorial Stadium in Bloomington, IN.  ((Photo by James Black/Icon Sportswire via Getty Images))

Andries, a 6-6, 335-pound offensive lineman out of Marshall, announced on social media on Sunday he’s declaring for the NFL Draft after the bowl game. The Gophers will face West Virginia in Phoenix, Ariz., on Dec. 28 to end the 2021 season. Minnesota ended its regular season with a 23-13 win over Wisconsin to keep Paul Bunyan’s Axe in Minneapolis.

Andries had the option to return in 2022 for a sixth and final year, as the 2020 season did not count towards eligibility due to the COVID-18 pandemic. Last week, center John Michael Schmitz announced he was returning to the Gophers in 2022, joining Tanner Morgan, Mo Ibrahim and Chris Autman-Bell.

Minnesota’s offensive line will have a different look in 2022. Along with Andries, Daniel Faalele has accepted an invite to the Senior Bowl. Sam Schlueter and Conner Olson are also redshirt seniors in their final year of eligibility.

Andries was a First-Team All-Big Ten pick by the media after the season. He was 29-16 as a starter with the Gophers, and is currently working on a master’s degree in applied business analytics.

The Gophers have not had an offensive lineman taken in the NFL Draft since Greg Eslinger and Mark Setterstrom in 2006. Faalele is likely to change that, and Andries could be a late-round pick.

PJ Fleck said last week he doesn't anticipate any Minnesota players opting out of the Guaranteed Rate Bowl to prep for the NFL Draft.

PJ Fleck was busy introducing his 2022 recruiting class on National Signing Day last Wednesday when he stopped during the Signing Day Social luncheon at Huntington Bank Stadium to give an update on running back Trey Potts.

Potts had to leave Minnesota’s win at Purdue in a pouring rain with an undisclosed injury. He was taken to a hospital and spent nearly a week in the West Lafayette area recovering. Potts, a redshirt sophomore, was one of three running backs along with Mo Ibrahim and Bryce Williams to suffer season-ending injuries.

Potts had 121 yards and three touchdowns in Minnesota’s win at Colorado. He also had 178 yards and two scores against Miami (Ohio). For the season, Potts averaged nearly five yards per carry and had six touchdowns in five games.

Fleck has not said anything definitive about Potts’ status for the 2022 season, or if the injury suffered at Purdue has his playing career in jeopardy.