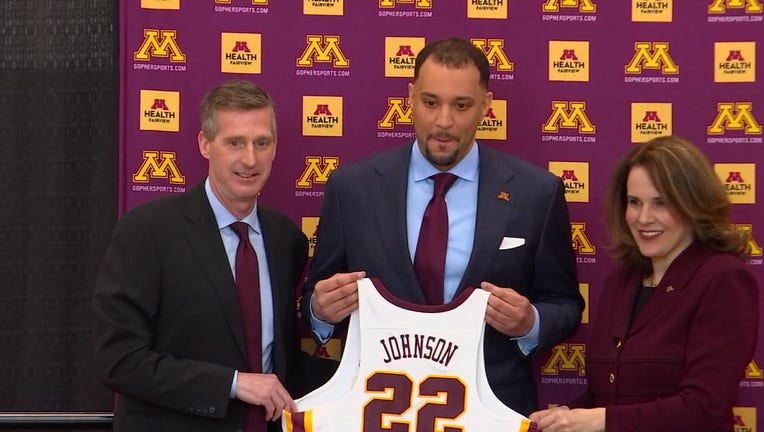 Ben Johnson, entering his second season leading the Gophers, met with reporters on Tuesday and had one message in a six-minute statement to open his news conference: "We’ve got to change our mindset, change the narrative, think like winners."

The University of Minnesota men's basketball team opened is holding its first workouts of the fall season this week.

Johnson’s first season in Minnesota ended with a 13-17 record, including a 4-16 mark in Big Ten play. There was early excitement around the first-year head coach after a 9-0 start, and a Big Ten road win at Michigan. The season didn’t end how he would’ve liked, but he said his first team build the foundation for how they want to operate. He said it was never a group that got down on themselves.

"Never, and I think that’s why that group was so important because they didn’t have that. That mentality just has to transfer on down. If you’re not thinking like that, you’re in the wrong program," Johnson said.

Johnson and the Gophers were dealt adversity over the summer, with season-ending injuries to Parker Fox and Isaiah Ihnen. Both had worked their way back from injuries that ended their 2021-22 campaign, and now they both have to sit out again.

Tuesday’s practice was open to reporters. Fox was doing light shooting on his own with a sleeve on his right leg, while Ihnen was doing rehab exercises. Johnson says they have no choice but to move forward.

"We can’t be in the mind frame of ‘Here we go again,’ or ‘Oh my God, how did this happen again?’ We’ve got to own it, our mind frame has to be that’s not the narrative of this team. It’s not going to be typical Minnesota story, that has to change and it’s going to change," Johnson said. "We have to create our own path, and it starts with that winner’s mentality. What’s done is done, we’re moving forward in everything that we do."

Johnson says their biggest task is to block out the negativity, and think like winners. As a Minnesota sports fan himself, he’s witnessed the failures of the Vikings, Twins, Timberwolves and other sports.

"The hardest part is to change that, and that’s my job. Winning programs don’t think like that. It’s not going to be the old Minnesota sports story of here we go again, that’s not happening," Johnson said.

Programs like Duke, Kentucky and Michigan State don’t have that issue.

Garcia learned earlier this summer he’ll be eligible to play this season after the NCAA granted him a medical hardship waiver. He went to Marquette out of Prior Lake, then transferred to North Carolina.

"Dawson is a man on a mission right now. I’m talking about his mentality and his leadership of how he goes about his work. He brings the juice and that warrior’s mentality to everything he does," Johnson said.

Johnson also thanked Gophers’ Athletic Director Mark Coyle, and President Joan Gabel on Tuesday. Back in June, he received a one-year extension that puts him under contract through the 2026-27 season.

Johnson knows the 2022-23 Gophers’ squad has talent. It’s about changing the mentality, and acting and playing like winners that could set this team apart. Minnesota opens the 2022-23 season with a Nov. 2 exhibition against St. Olaf. The regular season opener is Nov. 7 against Western Michigan at Williams Arena.