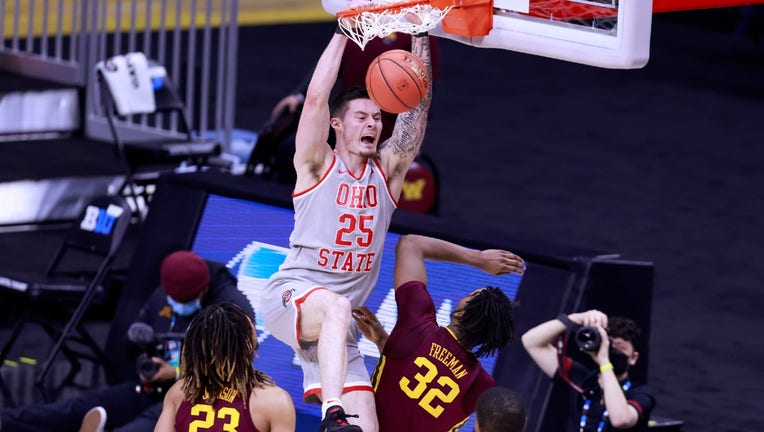 Kyle Young #25 of the Ohio State Buckeyes dunks the ball in the game against the Minnesota Golden Gophers during the first half in the second round game of the Big Ten men's basketball tournament at Lucas Oil Stadium on March 11, 2021 in Indianapolis ((Photo by Justin Casterline/Getty Images))

MINNEAPOLIS - It wasn’t without a fight, but the University of Minnesota men’s basketball team had its season come to an end in a 79-75 loss to Ohio State on Thursday at the Big Ten Tournament.

The Gophers’ season ends with a 14-15 record, and without a trip to the NCAA Tournament for the fifth time in eight seasons under Richard Pitino. It could also mark the end of Pitino’s tenure at Minnesota.

There’s been speculation about his status since the Gophers lost seven straight games heading into the Big Ten Tournament, after being ranked as high as No. 16 in the country at one point.

That decision is ultimately up to Athletic Director Mark Coyle, and it will need to be made soon.

"I don’t know what the future holds, I’ve been very transparent with you guys. Life will go on regardless, and we’ll all be OK. We’ll see where it all goes.

"I have respect for authority. It’s not my decision. We all have bosses, that’s OK. I do have a great relationship with Mark. If he gives me some bad news, it doesn’t mean I’m going to flip a desk or anything. Life goes on. I respect tough decisions. Would I love to be back? Of course I’d love to be back. Not my decision," Pitino told reporters after Thursday’s loss.

Minnesota trailed Ohio State 13-0 out of the gate, and trailed 39-27 at the half. The Gophers shot just 25 percent from the field in the half, including 2-of-15 from the perimeter. Without Liam Robbins available, the Buckeyes took advantage with 26 points in the paint in the first 20 minutes.

The Gophers rallied to cut it to four in the second half before Ohio State went on a 15-7 run to take a 72-60 lead with less than two minutes to play. The Gophers cut it to as close as 75-74 in the final minute after Marcus Carr hit a 3-pointer, but the Buckeyes made late free throws to end Minnesota’s season.

Carr was visibly emotional leaving the court, embraced by Ohio State coach Chris Holtmann with Minnesota’s season coming to an end. It might mark the end of his time with the Gophers, as he could opt to pursue a pro career rather than return for one more season.

Carr finished with 24 points on 7-of-24 shooting. Jamal Mashburn Jr. had 18 points, and Tre Williams had 11 points and eight rebounds. Cold shooting again hurt the Gophers, as it has the second half of the season. They shot 36.4 percent for the game, and 8-of-32 (25 percent) from the perimeter.

In his final college basketball game, Eric Curry didn’t score, had two rebounds and two assists in 15 minutes. He said the team tried to stay positive after the loss.

"We just tried to keep our heads up high because we knew we fought back and we gave our all. We knew we gave each other our best at the end, the fight back and making that game close," Curry said.

Minnesota was without Robbins and Gabe Kalscheur for the sixth straight game. Without Robbins, Ohio State finished with 44 points in the paint.

After the loss, Pitino focused on his team’s fight to keep the game close until the end.

"I said hold your head high, you guys fought. You fought until the end and that’s what you’ve got to do in March. It’s win or go home," Pitino said. "Undermanned, it’s really hard when you take two very important players off the roster, and they didn’t feel sorry for themselves. They went out there and scratched and clawed, and left it all out there."

Now, those who follow Gophers’ basketball wait on Coyle to see if Pitino is involved with the future of Minnesota basketball, or if a coaching search is soon underway.