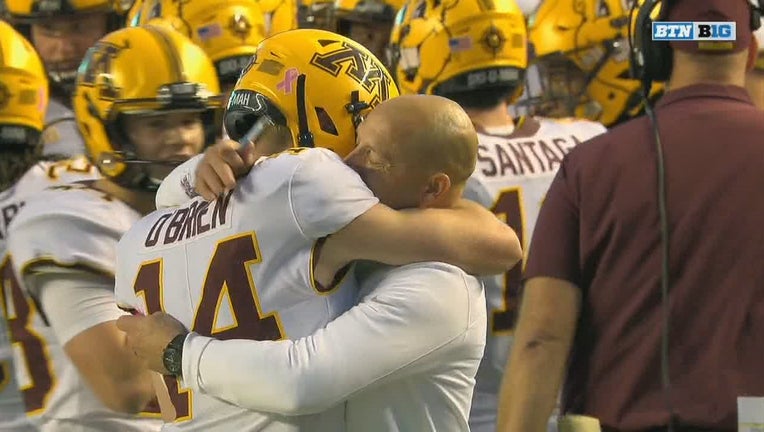 Casey O'Brien and Fleck embrace after O'Brien makes his Gophers debut on Saturday after battling cancer.

MINNEAPOLIS - Casey O’Brien has played his last game with the University of Minnesota football team, and he’s going out on his terms.

O’Brien announced on social media Wednesday night he’s retiring from college football, has earned his degree and is starting a job in the financial industry in the next few weeks.

In his Twitter post, O’Brien said, "Thank you for allowing me to live my dream. As a hometown kid, I wouldn’t trade my four years as a Gopher for anything. I will always remember our fans unwavering support as I battled cancer. Dear college football, thank you for providing me with a platform to help change the world of cancer. I am thankful for all the doctors, nurses and staff at Masonic Children’s Hospital who care for kids just like me. You are amazing. To all the kids out there fighting cancer, keep fighting. I will always be there for you. For me, I’m excited to put my degree to work and start my professional career in financial planning in a few weeks."

Casey O'Brien was the holder for a play, bringing his coach to tears on the sideline of the team's game against Rutgers.

O’Brien became a national story during the 2019 season, getting in his first Division I football game at Rutgers as a holder on special teams.

In that 42-7 win, O’Brien held for three extra points in the second half. The following week, he got to hold for at least one point after in the Gophers’ 34-7 home win over Nebraska. O’Brien is a five-time cancer survivor who has battled Osteosarcoma since playing football in high school at Cretin-Derham Hall.

O’Brien’s 2019 season came to an end after a fifth cancer diagnosis, which he successfully battled. He did not play this past season due to health concerns with the COVID-19 pandemic.