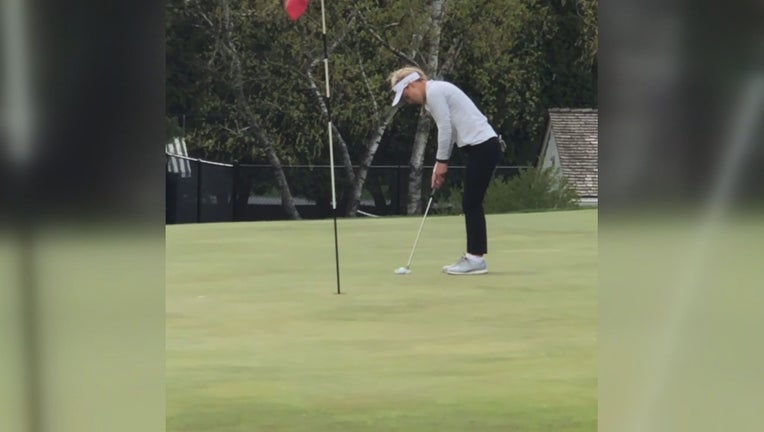 Isabella McCauley, 17, sinks a putt during a qualifier for the U.S. Women's Open.

INVER GROVE HEIGHTS, Minn. (FOX 9) - Isabella McCauley is only 17 years old, but she’s already playing golf at some of the highest levels a high school athlete can.

As a freshman, Isabella won the Class AAA individual state championship with Simley High School in 2019. Then, due to COVID-19, she didn’t get the chance to repeat in 2020, but did win the Minnesota State Junior Girls’ Championship last summer.

Isabella McCauley is only 17 years old, but she’s already playing golf at some of the highest levels a high school athlete can.

Now, Isabella is getting ready for perhaps the toughest challenge yet in her young golfing career: The U.S. Women’s Open. In a field of 36 players at Somerset Country Club in Mendota Heights, McCauley shot a two-day 143 to earn one of two qualifying spots for the U.S. Women’s Open. The other went to current LPGA professional and Wayzata native Sarah Burnham.

During Monday’s tournament, on the back nine, her uncle - who also happened to be her caddie - told her she was very much in contention.

"I’ve never been so nervous on a putt my entire life, but just going through my mind knowing I’d qualify, that was literally the best feeling in the world," said Isabella.

Isabella, who has been playing golf since she was six years old, shot a 1-under par 71 in her first round and capped it with an even-par 72 on Monday. She finished one shot behind Burnham. The event is one of 23 qualifiers played around the country to help form the field for one of the four major championships in women’s golf.

"I think it’s going to be a really cool experience and I’m putting absolutely no pressure on myself," said Isabella. "I’m just going to enjoy the whole trip. Obviously you want to do well, but there’s going to be no pressure at all, so I’m just really happy to be going."

Since qualifying, Isabella says her phone has been "blowing up" with messages from family and friends.

"And I just like ran up to her and gave her a big hug," said Reese McCauley, Isabella's sister. "I was like so pumped for her. That’s like the coolest experience."

The U.S. Women’s Open will be played June 3-6 at The Olympic Club in San Francisco. Just two weeks later, Isabella has the option to defend her state title at Bunker Hills in Coon Rapids.

Isabella will be a high school senior this fall, but in the fall of 2022 she’ll have more golf to play as she’s committed to play collegiately at the University of Minnesota.