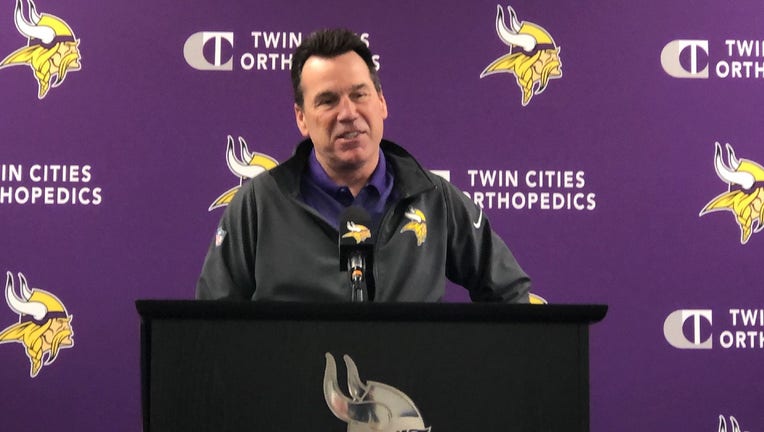 Gary Kubiak is reportedly considering retiring after taking over as Vikings' offensive coordinator for the 2020 season.

Speaking with reporters last week before the Vikings beat the Lions, Kubiak said he takes things year by year. According to a report from Tom Pelissero with NFL Network on Monday, Kubiak is leaning towards retiring.

If Sunday’s game was Kubiak’s last with the Vikings, Zimmer will be seeking his sixth different offensive coordinator in six seasons. Kubiak replaced Kevin Stefanski, who led the Cleveland Browns to an 11-5 record and the AFC Playoffs in his first season as a head coach.

Kubiak is 59 years old, has already won multiple Super Bowls and already stepped away from head coaching in recent years due to health concerns.

"He’s taking some time to mentally think about the season and where he’s at health-wise, and then he’ll decided what he wants to do," Zimmer said Tuesday.

With Kubiak in charge, the Vikings finished fourth in the NFL in total offense in 2020, averaging more than 393 yards per game. They scored 26.9 points per game, good for No. 11 in the NFL and fifth in the NFC.

Running back Dalvin Cook finished second in the NFL in rushing with 1,557 yards. His 16 rushing touchdowns was good for second in the NFL, and he led the league with 1,918 yards from scrimmage.

In his third season with the Vikings, Kirk Cousins passed for 4,000 yards for the fifth time in his last six seasons as a starting quarterback. He had a career-high 35 passing touchdowns, with 13 interceptions.

The Vikings finished 14th in the NFL in passing, and fifth in rushing. Zimmer on Tuesday called it one of his most explosive offenses in his seven years.

"I love Gary Kubiak, he’s an unbelievable person. Unbelievable coach, a great ear to me. I love sitting there talking to him, we’re both the same kind of guys. I think it’s always good to take some time and think about where you’re at. Mentally and physically, obviously this year was a major mental and physical drain on all of us, including the players," Zimmer said. "We’ll just see how that unfolds as we move forward. The best I’ve ever been around, terrific person, great coach. I loved having him."

If Kubiak doesn’t return, his son might be the favorite to replace him as offensive coordinator. Klint Kubiak has been the quarterbacks coach the past two seasons, and is as close to Cousins as anybody. Another possibility is offensive line coach Rico Dennison, or the Vikings could go outside the organization.

Zimmer urged patience with the decision, it’s been less than 48 hours since the season ended.