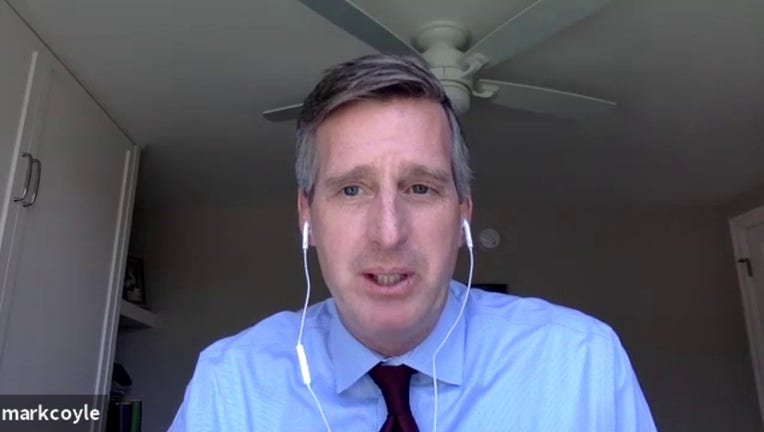 Mark Coyle spoke with reporters Friday about financial difficulties the Gophers athletic department is facing due to the Covid-19 pandemic.

His new boss, Athletic Director Mark Coyle, was sitting within ear shot and listening intently as his new football coach did his best to win his first news conference. Fast forward three years, and Coyle now likely has several difficult conversations ahead of him as the Gophers athletic department attempts to stay above water during a trying financial time across all of colege sports due to the Coronavirus pandemic.

Coyle was headed to Indianapolis during the Big Ten men’s basketball tournament to meet with other athletic directors when Covid-19 turned the sports world upside down. The Big Ten Tournament was canceled. March Madness… gone. All remaining NCAA winter and spring activities? Canceled. Potential revenue from those ticket sales and TV contracts? Gone.

Coyle went in front of the university’s Board of Regents last Friday to give an update on where the athletic department is financially. Heading into the Big Ten Tournament, they were prepared for a $1 million surplus. That turned into a roughly $4 million shortfall.

It prompted a spending freeze, reassessing travel budgets and as many as 200 coaches and senior staff members for the Gophers taking a voluntary reduction in salary. Some of those names include Fleck, Richard Pitino, Lindsay Whalen and Hugh McCutcheon. That’s just the start. Coyle anticipates more salary cuts for fiscal year 2021.

“We’re doing everything we can to get towards a balanced budget, but as each passing day comes this fiscal year, it’s going to be more and more unlikely,” Coyle said Friday.

His next decision will be whether to cut budgets across the board in an effort to save all 25 Gophers sports, or cut programs altogether. Coyle presented financial scenarios for the athletic department, largely dependent on the college football season. The Gophers’ football program, like many for most Division I schools, is the department’s primary revenue generator.

The best case scenario if students can return in the fall and we have football, Coyle estimates, is a near $10 million loss in revenue due to declining ticket sales and drop in donations. If there is college football with no fans at TCF Bank Stadium, that revenue loss jumps to about $30 million.

Worst case scenario? Having to suspend the football season until early 2021. Without money from their media contracts, Minnesota could lose as much as $75 million in revenue. There a very few athletic departments that can withstand that. The Gophers cannot.

Before Covid-19, Minnesota's athletic budget was eighth in the Big Ten and they had nine winter and spring sports ranked in the top 25.

“We’ve been very efficient and we’ve tried to maximize our revenues to allow our teams to compete at a high level,” Coyle said. “There’s no doubt that everything is on the table and we’ll have to look at how we run our program and then have to make decisions as we move forward.”

One area Coyle does not want to compromise is football. Fleck is entering his fourth season with the Gophers, led the program to its best season in 115 years and currently has a top-10 recruiting class for 2021. Fleck has been able to land five 4-star recruits in the last six weeks, and none of them have seen campus yet. They’ve built relationships online, and taken virtual tours via Zoom and social media due to Coronavirus.

Football is his biggest money-maker, and excitement has never been higher for the Gophers.

That said, the football season and a potential start date hinges on model data and what advice medical experts can offer. Not every state with a Big Ten school will be open in the fall, presenting all kinds of complications on having a sports season.

“When we come back, we want to make sure we provide the safest possible environment we can for our student athletes. That’s at the center of every one of our conversations,” Coyle said.